Burke made pleasing return to MLS 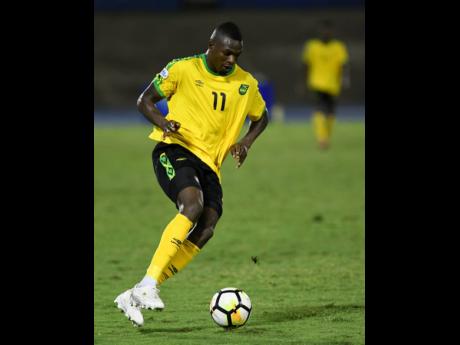 For the first time in 18 months, national striker Cory Burke took the field for his Major League Soccer (MLS) club the Philadelphia Union in a league fixture.

The 28-year-old Burke came on in the final 13 minutes of their 2-1 win over the New England Revolution on Monday night in Foxborough, Massachusetts, as the Union continued their winning form.

Union head coach Jim Curtin said after the game that he was pleased with how Burke performed during his brief cameo.

“It’s great to have him back. I thought he got out there, worked hard, made his presence felt almost immediately, and did a good job for us,” Curtin said.

An Andrew Farrell own goal in the first half combined with an Anthony Fontana effort in the 69th minute sealed the victory for the Union. However, an 80th-minute strike from Revolution forward Tajon Buchanan made things uncomfortable for the Union in the final 10 minutes of the game and needed a late save from the Reggae Boy captain Andre Blake to preserve all three points.

Burke’s last MLS game was April 20, 2019, when he scored in a 3-0 win over the Montreal Impact. Since then, he has been out of the team for more than a year as he encountered issues with his US visa, which forced him to return to Jamaica in May 2019 to resolve the matter. As such, he was loaned out last year to Portmore United in August 2019, and again last January to Austrian club SKN St Polten until he was finally given his visa and clearance to return to the United States earlier this month

He has not played a game since his last loan move ended in July, and Curtin said that he expects improvement with more games under his belt.

“It’s a tough time for a striker to come into the game where your only options are going to be on the counter. He just missed a couple [of] passes that could have maybe iced the game for us,” Curtin said. “Obviously, it’s good to get some minutes under his legs and he will only get better and sharper now as we get set for a very tough Toronto game.”

The Union who have already qualified for the MLS playoffs will face eastern conference-leading Toronto FC on Saturday.