Girlfriend carried man to the house when I was there 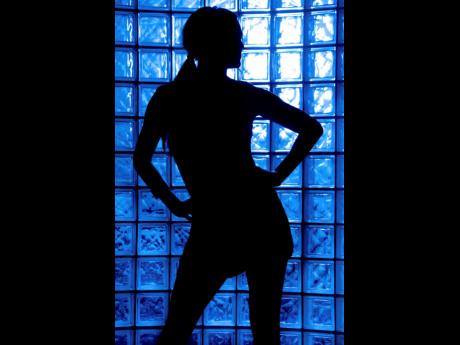 Recently, I was in a situation that I found rather embarrassing and demeaning. Imagine having your girlfriend of seven months and only to be disrespected in the manner I was.

I have never before taken the habit of visiting female's homes. I found this girl whom I like and appreciate, and after several months, she gained my trust, and I started to stay over her house on weekends. I only visited her because I have doubts about her in the back of my head.

Anyways on my fourth visit, I said I was going to spend the weekend with her because she was always complaining that we were not spending enough time together. To cut a long story short, when we got home, she started acting very strange. She was behaving as if I did something wrong. She began to behave as if she was angry. After taking a shower, I came out of the bathroom, got dressed and I lay down. But, she was gone for too long. So I went to look in the other room. She was in her sister's room still acting upset. I was about to apologise and then her phone rang. She took the phone from beneath her, so obviously, she was hiding it. The next thing she said to me was that the police were on their way. She said she thought it was her sister who called them.

Obviously, I didn't believe her story, but I did not take any time to check. I called the police station but the police did not show up at the same time.

While at her house, a guy came there and she went to the front of the yard to be with him. They had a long conversation and obviously she was enjoying the conversation because she did not stop laughing and even hugged the guy. They were actually in love. This is a girl I see every day, except on weekends. So, you should realise the level of this relationship I was in.

About an hour later, the police came and she went to meet the police and she used expletives. The guy she was outside with knew that I was there. He saw me. She took the guy inside her room and closed the door, and after a certain amount of time, the guy came out of her room and went into his car and left.

I got the impression that she has been selling sex discreetly. I am not trying to bring her down, but, from her behaviour, I got that impression. This guy was not about to leave until he got something.

I just want other young men to learn from my experience. You could see a girl every weekday and you feel complacent and confident. Just know that she might still be able and willing to cheat. I left the following morning. We did not exchange words thereafter.

I have deleted some of what you have said because, as I read your letter, you convinced me that you are not a very wise man. You should have seen from the behaviour of this young woman that she has other men in her life. You are not special to her. You went to spend the weekend with her but it was not a good weekend for you to be there, because, evidently, that was a weekend that she was expecting another man.

The other man was just as important to her. That is why she could not have kept him outside the house all the time; he ended up in her room.

You could not have prevented him from going into her room and perhaps stop him from doing what he was accustomed to do. But, I must ask you this question, when you saw what was going on, why didn't you go home? The woman wanted you out of her house. That's why she was behaving as if she was angry. But, like a big fool, you remained and were embarrassed. You didn't have to face that embarrassment if you were wise.

This woman has told you not just in words, but in action, that she doesn't want you. And you are standing in the way of her lifestyle. So, end the relationship with her and please, don't go back to her place.