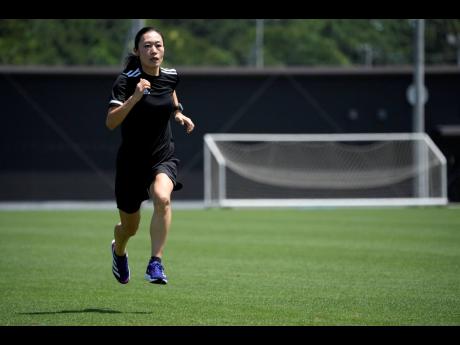 Yoshimi Yamashita of Japan, one of three women picked to be head referees at the FIFA World Cup, warms up during a training session at JFA YUME Field in Chiba, near Tokyo, Japan, yesterday.

Japanese referee Yoshimi Yamashita agrees with Pele or whoever it was decades ago that first described football as the "beautiful game."

Yamashita is one of three women picked by FIFA to be referees at the World Cup in Qatar, which starts on November 21. It's the first time a woman will be in charge on football's largest stage.

She sees her job this way: Let the game shine, as it should.

"One of the big goals as a referee is to bring out the the attractiveness of football," she said in Tokyo in an interview with the Associated Press yesterday. "I do my best for that, and I will do what I should at that time toward that end. So if I need to communicate with the players, I will do that. If I need to show a card, I will show a card. Rather than control, I'm thinking about what to do toward the big goal of bringing out the appeal of football."

Stephanie Frappart of France and Salima Mukansanga of Rwanda are the other women who were selected. There are 36 referees in total. FIFA has also named three female assistant referees in a pool of 69: Neuza Back of Brazil, Karen Diaz Medina of Mexico, and Kathryn Nesbitt of the United States.

Though it's likely all three will be in charge of games, it's not a given. They would also be used as "fourth referees" on the sidelines. However, they cannot be used as assistants.

"Each match official will be carefully monitored in the next months with a final assessment on technical, physical and medical aspects to be made shortly before the World Cup," Massimo Busacca, FIFA's director of refereeing, said.