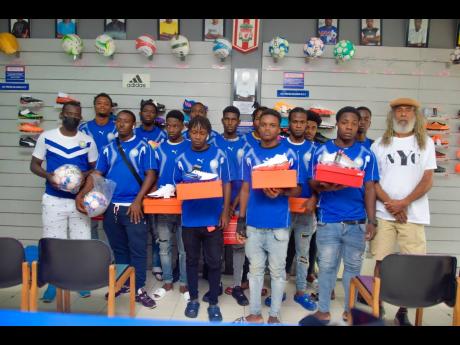 The members of the Caymanas Gardens Under-20 Football Club were the recipients of new footballs and gear, just in time to compete in the St Catherine U20 Football League at the weekend.

The gear came from a fundraising venture in the community through the assistance of corporate entities and donations from individuals.

"We needed the gear and match balls for the team members, and thanks to a member of the community, Anthony Jackson, who is now playing a major role in our fundraising efforts, he contacted some of his business associates for assistance," Dwight 'Fanna' Fowler, one of the team's coaches, said. "We had a jerk fiesta over two Saturdays and the members of the community came out and supported it. The funds that we raised, as well as donations from some of our friends were what we used to purchase the items last Friday at Western Sports in Twin Gates Plaza (in Half Way Tree)."

Jackson said that when he heard that the team needed support, he knew he had to act quickly.

"I reached out to persons from the corporate world to help with items for us to make the fundraiser a success," Jackson said. "First and foremost, we would like to thank CB Group who provided us with CB Chicken, Seprod provided us with Miracle Hot Pepper Sauce, and Delite Juices, Baking Enterprises donated Yummy bread rolls, corn [and] cheese bread and other pastries, Cari-Med Limited gave us Swiss Tomato Ketchup, and Musson Trading provided Nupak Foil. If it weren't for these companies, we wouldn't have been able to get the gear."

The league kicked off at the Spanish Town Prison Oval last Saturday, with Caymanas Gardens U20 beating Cumberland U-20 4-1.

"The members of the team are happy with their new gear and football boots, and the win has even motivated them further to continue playing at their best. We are looking forward to more wins this season," Fowler said.