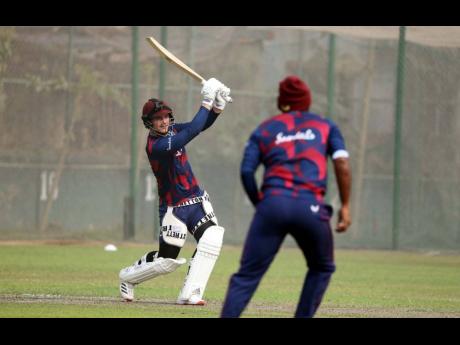 Josua Da SIlva plays an attacking shot during his innings of 56 in the West Indies Iner-squad match at the BKSP Ground in Dhaka yesterday.

Da Silva retired following an impressive 56 from 69 balls, which included six fours and one six, as the batting XI posted 258 for nine off 47 overs.

Powell also looked in good touch, as he compiled 49 from 40 balls, with four fours and three sixes, before he went lbw to left-arm spinner Akeal Hosein.

Sunil Ambris, who opened the inning with Da Silva, contributed 39 from 52 balls before he was also trapped by Hosein, who finished with two wickets for 46 runs from his nine overs bowled.

Jamaican Nkrumah Bonner and Andre McCarthy also got a knock during the squad exercise in preparation for the first One-Day International (ODI) against Bangladesh on Wednesday.

Bonner, batting at number three, made 29 from 23 balls, with two fours, before he was stumped by Jahmar Hamilton off captain Jason Mohammed.

McCarthy faced 32 balls for his 19 before he was caught by Alzarri Joseph off Rahkeem Cornwall.

Head coach Phil Simmons said he has been pleased with the attitude and commitment shown from the new players in the squad, and he is expecting good things from them when the series gets going.

"I think they have all impressed me, and they all have that hunger in their eyes and have all played well. They have done all that we ask them to do and they have tried to work hard on their games," said Simmons.

Simmons added that he would have wanted more time with regard to the preparation ahead of the series; however, he is hoping that the team can get the job done nevertheless.

"It's never enough for me, I think that I would have liked the sort of time that we had in New Zealand, but this is what we have and we have to try and fit in as much as we can in that period," he said.