Deshorn off to perfect start in India 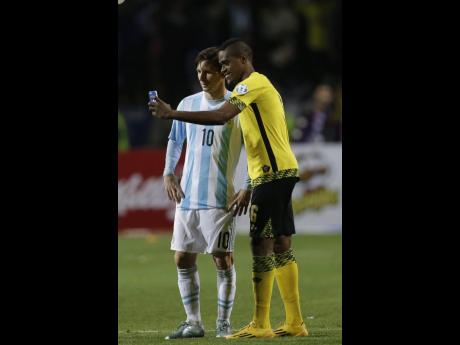 Jamaica’s DeShorn Brown takes a selfie with Argentina’s Lionel Messi at the end of a Copa America Group B match at the Sausalito Stadium in Vina del Mar, Chile, in June 2015.

National striker Deshorn Brown had an ideal start to his new club North East United as he marked his debut with a goal in their 2-1 win over Jamshedpur in their Indian Super League (ISL) fixture on Sunday at the Tilak Maidan Stadium in Goa, India.

The 30-year-old Brown, who only signed with the club a few days prior, netted what proved the be the game winner in the 61st minute, ending a four-match winless streak. Brown was previously with Bengaluru FC, but left the club by mutual consent after joining the team in January last year.

He only managed to make five appearances for Bengaluru last year, scoring twice. Brown made the switch officially last Friday and now joins the franchise which is owned by Bollywood actor John Abraham.

North East got to the perfect start when Ashutosh Mehta opened the scoring in the 36th minute after a brilliant header from the corner kick. Brown was introduced as a half- time substitute and it only took 15 minutes for him to have an impact on the game. United managed to win the ball in the opponent's half and midfielder Federico Gallego slipped a brilliant pass to Brown, who finished past Jamshedpur goalkeeper Rehenesh TP for his first of 2021 and his first since February 15, 2020.

Jamshedpur were given hope when Peter Hartley reduced the deficit to one in the 89th minute, but despite the referee adding seven minutes of stoppage time, United held on for the win.

While Brown began life in the ISL last year, his latest club is the ninth of his career. He has played in the United States, China, Norway and Spain. He has not put on the national colours in six years, with his last international appearance being October 13, 2015, in a friendly against South Korea.

North East are currently fifth with 15 points from 12 games played. Their next fixture will be against ATK Mohun Bagan on January 26.