Eroy back with a vengeance 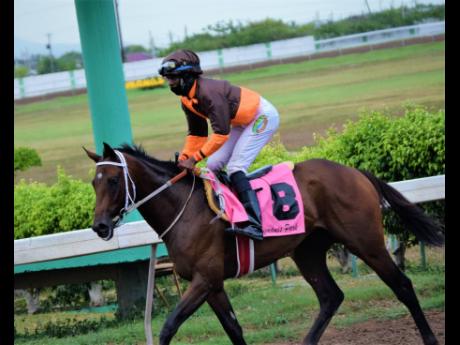 EROY, with Omar Walker aboard

EROY galloped out of his backyard Sunday morning, the nine-furlong chute, blazing six and a half furlongs in 1:19.4, telling all and sundry that he has recovered from the stone squeeze, which made him an early scratch on November 21, handing the pace and race to 24-1 stunner, JAMAI RAJA.

Having advertised his well-being, expect EROY, who returns with tongue tie fitted, to blitz his 13 rivals at his favourite trip, having put away both the Jamaica Derby and St Leger winner at a mile in two of his last four starts.

Forgive the son of Kohzan, Florida's leading stallion this year, for his run at nine furlongs and 25 yards in the mud, drawn widest and not handling the underfoot conditions when finishing down the track behind shock winner, ROY ROGERS, on November 7.

EROY showed his versatility and class on September 13, sitting level with topweight and chasing another top-notch importee, SIR ALTON, at six furlongs on September 13 before returning to floor KING ARTHUR at a mile in 1:37.0 on October 10.

MASTER OF HALL has the only semblance of pace to try testing EROY. He came out of the woodworks on last to chase JAMAI RAJA in unforgiving splits at seven and a half furlongs before being relegated to third by late-charging LEGALITY.

That was his best effort since beaten in a blanket finish by RACE CAR and SENTIENT on August 6, signalling a return to form. However, he is up against a tough foreigner who continues to scorch the exercise track in the mornings.

Prior to being scratched, EROY had posted a bullet 1:05.0 for five and a half furlongs, a work only bettered by TOONA CILIATA's 1:04.3 two days later.

LEGALITY remains a genuine closer who is sure to run his usual honest race. He has been in great shape for a horse, who recently returned off an 11-month lay-up. However, he will have to await his turn with EROY around.

TRICKY ONE and BIGBANG, LEGALITY's stablemates, will also be coming to earn a share as their trainer, Anthony Nunes, battles to keep his head in front Wayne DaCosta in the title race. Keep them all in mind for the hi-five.