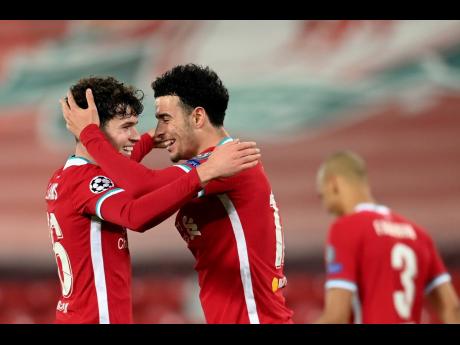 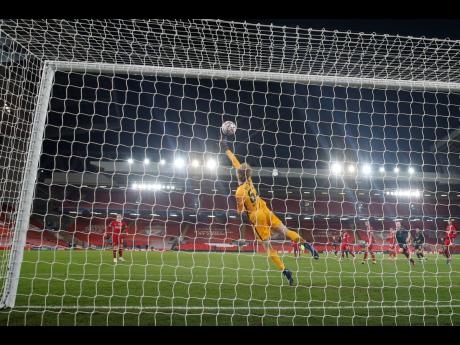 Liverpool’s goalkeeper Caoimhin Kelleher saves as he tips the ball over the goal during the Champions League group D soccer match between Liverpool and Ajax at Anfield stadium in Liverpool, England, yesterday.
1
2

Jurgen Klopp could count on his kids to see injury-depleted Liverpool through in the Champions League.

A first European goal from Curtis Jones secured a 1-0 victory over Ajax yesterday, clinching a place in the knock-out stage with a game to spare in Group D.

The midfielder scored after connecting with a cross from fellow 19-year-old Neco Williams, taking advantage of the stranded goalkeeper Andre Onana and clipping the ball into the net with the outside of his right boot in the 58th minute.

It was a night to forget for Onana but one to remember in goal for Caoimhin Kelleher for the six-time European champions. Handed his Liverpool debut after Alisson Becker joined the injury list, the 22-year-old Kelleher's performance belied his experience.

A header powered in by Klaas-Jan Huntelaar was pushed over by the Irishman. He also tipped over a rising shot from Noussair Mazraoui in the first half and pushed away another effort from the Ajax defender after the break.

No wonder his commanding performance was being applauded on the touchline. And when the final whistle blew, Klopp went over to embrace Kelleher at the last Anfield game before fans are allowed back in.

When England's national lockdown ends on Wednesday, Liverpool will enter tier two of coronavirus restrictions, ensuring up to 2,000 fans will be in for Sunday's Premier League game against Wolverhampton.

Ajax now has to beat Atalanta in the Group D finale to reach the knock-out phase after the Italian side moved a point ahead into second place by drawing 1-1 with FC Midtjylland.

It was a week ago that Atalanta stunned Liverpool by winning in northwest England.