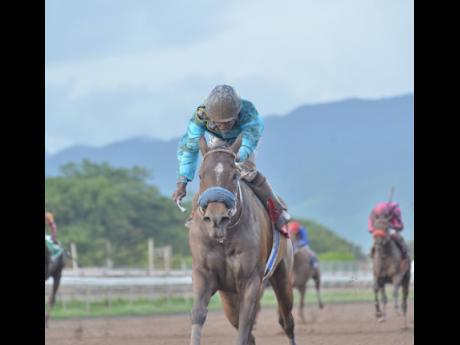 File Dane Nelson aboard Princess Ava gallops to victory in the Seymour Mullings Trophy over 1600m at Caymanas Park on December 12, 2019.

PRINCESS AVA returns off a near seven-month lay-up, going a mile on Sunday, facing SENTIENT, who she had humbled on December 14. However, SENTIENT was afterwards fitted with a visor and romped three consecutive races, a win streak interrupted by TOONA CILIATA when going for a four-timer in the King's Plate on March 17.

Though SENTIENT was busy competing, having raced three times this season, PRINCESS AVA isn't all that badly off because the three-month COVID-19 break has almost levelled the playing field, giving trainer Anthony Nunes a chance to make up for lost time by putting the filly through the grind at exercise, especially in the last two weeks.

PRINCESS AVA has looked none the worse coming off the break, clocking 1:27.4 and 1:14.4 at seven and six furlongs, respectively, in back-to-back Sunday morning workouts.

Both horses have had their spats with PRINCESS AVA coming out on top in three of four head-to-head clashes. They first crossed paths in last year's Jamaica Derby, SENTIENT running his best race yet, carrying the field to the furlong pole before SUPREME SOUL took over to win by two lengths.

PRINCESS AVA, who was fourth in the derby, beaten 10 lengths by second-place SENTIENT, certainly learnt a lot from that run because she was storming home in the St Leger a month later, after enduring multiple stops in the straight, finishing third, three across the track, in a driving finish with SUPREME SOUL and TOONA CILIATA, well ahead of fifth-place SENTIENT.

When she met SENTIENT in September at a mile, PRINCESS AVA suffered interference yet closed past him in the straight, eventually outfinished by his stablemate, United States-bred SHE'S AN INTROVERT.

Showing a liking for Dane Nelson's bustling rides, PRINCESS AVA rounded off her 2019 season with back-to-back wins, the last being a convincing victory over SENTIENT at a mile, improving from back of the pack a half-mile out to a sweeping two-and-a-half length victory timed in 1:37.3.

Though SENTIENT afterwards went on a three-race win streak and was only denied a fourth when finishing third behind TOONA CILIATA on March 17, the company was dubious. He first beat DUKE in a non-winners-of-three, then speedy but short-running KINGSMAN, both at seven and a half furlongs, followed by a massacre of over-the-hill HOVER CRAFT at a mile.

Being the quickest horse in Sunday's line-up SENTIENT will try going gate to wire with Christopher Mamdeen in a bid to escape late-running PRINCESS AVA. Nunes has summoned Nelson to ride seven pounds over the allotted 112lb, putting his faith in the rider rather than the handicaps, which would have had the filly 14lb lighter than the colt on her return.

However, PRINCESS AVA has been blazing at exercise and is still getting seven pounds from SENTIENT, who has been lounging in the mornings, his last 'speed' gallop being 1:04.2 in the company of stablemate WOW WOW, who posted an easy 1:01.3 for five furlongs round.

A lot will depend on the pace, which should be controlled by SENTIENT. Mamdeen will try making a run for home but Nelson will be rousing the filly from early down the backstretch, hoping to collar the colt in the straight.