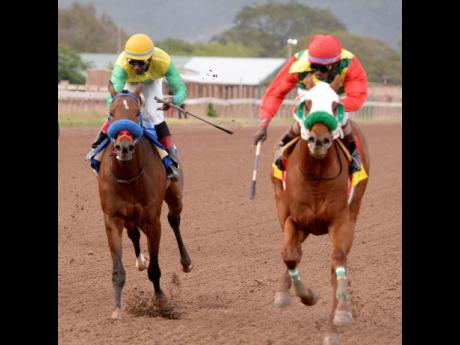 DIAMOND Mile third-place, TOONA CILIATA, runs with 130lb on Saturday in an 'open allowance handicap', a seven-horse field, including three of his stablemates - BRUCE WAYNE, GRAYDON and PRINCE CHARLES - going six and a half furlongs.

Despite burdened with topweight 130lb, TOONA CILIATA should be comfortable at six and a half furlongs, especially with stablemates GRAYDON and PRINCE CHARLES coming in at approximately 106 and 115lb, respectively, joining CHACE THE GREAT, to ensure PATRIARCH is kept honest for the first half-mile.

Since claimed from Nunes by Fitzgerald Richards for $1m on January 4, five-year-old PATRIARCH has extended his win streak to four consecutive victories, two on the trot for his new barn, the last being a rare but impressive victory on the round course, at five furlongs, beating former stablemate PRINCE CHARLES.

However, PATRIARCH returning off a four-month COVID-19 lay-up at six and a half furlongs, the farthest he has run in more than a year, appears too much an ask with a Nunes relay being anchored by TOONA CILIATA.

Ian Parsard's SUPERLUMINAL is one of the gamest horses in training but, already not a boy's ride, it certainly won't be an enjoyable one for a girl, female apprentice Tamika Lawrence, with no whip declared.

Former Sprint champion, CHACE THE GREAT, drew on his back class last time out to beat overnight allowance company, hanging on five and a half furlongs to beat UNCLE FRANK after shaking loose of an off-colour GOD OF LOVE.

Though he looked in good nick and will carry 116lb, CHACE THE GREAT is venturing back up in class and won't be able to bide his time unmolested in mid-pack as he did when pouncing on a declining MR UNIVERSE on June 20.

TOONA CILIATA's stablemates will ensure no 'outsider' gets to settle on the lead, paving the way for Dane Nelson to pounce with the four-year-old gelding, who clocked a bullet 1:13.3 for six furlongs last Sunday morning, putting away PRINCESS AVA.