Olympics organisers looking for a new date for opening, closing 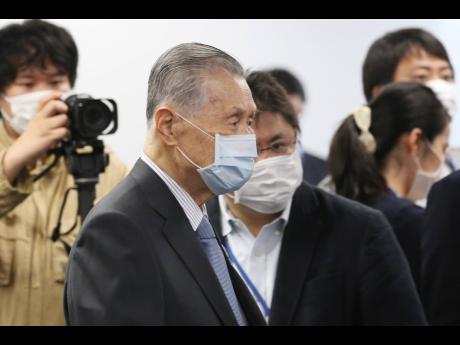 Tokyo 2020 Organising Committee President Yoshiro Mori arrives for the first meeting of the ‘Tokyo 2020 New Launch Task Force’ in Tokyo yesterday, March 26, 2020, days after the unprecedented postponement was announced due to the spreading coronavirus.

The Tokyo Olympics needs new dates for the opening and closing ceremonies in 2021.

Nothing much can get done until those dates are worked out by the International Olympic Committee (IOC), the Japanese government, and Tokyo organisers.

"We must decide this soon; otherwise, it will be hard to decide on other things to follow," Toshiro Muto, the CEO of the organising committee, told his 30 senior directors - all men but one - seated in a large meeting room yesterday.

Two days after the unprecedented postponement was announced, the group gathered for the first meeting of what is being called the 'Tokyo 2020 New Launch Task Force'. They must put the Olympics back together after they were torn apart by the coronavirus pandemic.

Muto and the president of the organising committee, Yoshiro Mori, each gave pep speeches. Mori, an 82-year-old former Japanese prime minister, drew on war memories from his youth to summon the resolve to redo in a few months what was seven years in the planning.

Muto ran off a condensed string of issues to be resolved: ticketing, security, venues, merchandise, accommodation, the athletes' village, transportation, and lining up unpaid volunteers. He added that he was looking at "thousands of contracts" and the interests of broadcasters, sponsors, the IOC, world sports federations, and National Olympic Committees.

"I didn't imagine at all we'd be tested to this degree," he acknowledged.

He also voiced another reality.

"Additional expenses are going to be quite massive, we assume," Muto said.

The Japanese financial newspaper Nikkei has estimated added costs due to the delay of US$2.7 billion. This would go on top of an official budget of US$12.6 billion. A Japanese national audit agency, however, says the actual amount of spending is about twice that size.

IOC president Thomas Bach said Wednesday that "all options are on the table" for new dates. He said next year's Olympics doesn't have to be restricted to summer in the Northern Hemisphere and might occur sooner.