MARAGH BACK IN THE SADDLE AT GULFSTREAM 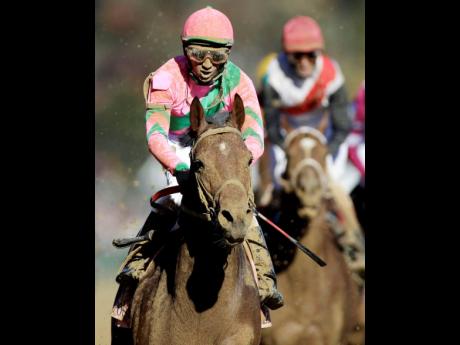 Jamaican jockey Rajiv Maragh reacts after riding Caleb’s Posse to victory in the Dirt Mile race at the Breeders’ Cup horse races at Churchill Downs in Louisville, Kentucky in 2011.

Jamaican jockey Rajiv Maragh has resumed racing at Gulfstream Park in Florida, this after he had decided to stop riding indefinitely due to the coronavirus outbreak.

Maragh, who rode in three races on Thursday, is expected to land another three mounts on tomorrow's big Florida Derby Day.

The 34-year-old said he decided to return to the track after the conditions at the facilities at Gulfstream had improved.

"At first, it was like holding a grenade in your hand that's about to explode. They were not observing the proper protocols as there were too many people in the jockey's room at any given time. What they have done is spread out the jockeys and valets who now utilise the patio area outside the room, which has become vacant because there are no patrons at the track."

Maragh went on to mention that the park has now stepped up temperature checks and has mandated that all pony boys and gate handlers wear masks and gloves as a precautionary measure.

"Things are a lot better, and I am glad that racing can continue because that is our bread and butter. If you don't ride, you don't get paid."

Several top jockeys are expected at Gulfstream this weekend for the big Florida Derby, however, the big race will be without prominent jockey Javier Castellano, who tested positive for COVID-19 on Thursday.

Castellano, who has ranked among the top three on the North American earnings list for nine consecutive years, is the first known positive test among jockeys in the US