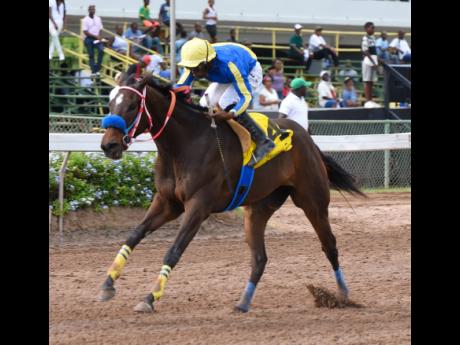 TRULY AMAZING (Aaron Chatrie) wins the sixth race at Caymanas Park on Saturday, January 4 2020. The four-year-old filly will be in action in tomorrow’s second race.

HAVING flexed his muscles last Saturday with debutant DOUBLE CROWN at seven furlongs, trainer Ian Parsard has another 'in-utero', HALLS OF JUSTICE, lined up to join impressive stablemate, MAHOGANY, on the three-year-old classic campaign. Tomorrow HALLS OF JUSTICE will take on six rivals at five furlongs straight in the Mercury Sprint.

Parsard doesn't normally ask his first-timers to do too much at exercise but HALLS OF JUSTICE has breezed half-miles from the gate in 46.2 and 46.3, pulled up in 1:02.3 and 1:02.1, respectively, gallops listed as 'easy' by the clockers.

Though he is breaking from post-position two, the speed HALLS OF JUSTICE has shown at exercise should have him clearing rivals from early and angling towards either mid-track or the faster stands' side.

Philip Feanny also has a debutant in the colts-and-geldings-only event, ADORATION, drawn at stall three, and showing good form at exercise, three consecutive bullet works of 35.2 on the round course, afterwards galloping 1:02.3 for five furlongs round, beaten a length by overnight-allowance stablemate, CRYPTOCURRENCY.

ADORATION, bred Adore The Gold-Save More, has more speed gallops under his girth than HALLS OF JUSTICE, which, in a clash of two talented first-timers, could decide who is unsaddled in the winners' enclosure.

MAKE UP ARTIST is a half-sister to PRINCESS LAUREN, who had shown promise last season as a three-year-old, winning at six furlongs on debut but hasn't been spotted since the classic season ended. Similar to all Wayne DaCosta horses, nothing has been left on the exercise track by MAKE UP ARTIST, who galloped five furlongs round in 1:00.4, January 11, followed by five and a half furlongs in 1:07.0 a week later.

However, NATIVE GOLD has five runs under her girth in which she was led only once, by ENGLAND'S ROSE, who has never had a horse in front of her for the first three furlongs of any race. Since fitted with the visor for her last two starts, NATIVE GOLD has held her speed longer, going down by a length and a half to SUASION at five furlongs round and passed only a half-furlong out, going six, caught by the winner, GLOCK, on New Year's Day.

Should MAKE UP ARTIST display any of the traits of her half-sister, PRINCESS LAUREN, who took a while to get going when winning on debut, NATIVE GOLD will use her speed and the track bias, the faster stands' side, to steal home.