Tokyo medal on his mind 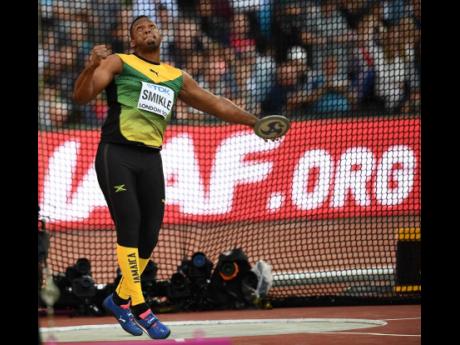 National discus thrower Travis Smikle says that he is determined to mount a challenge for an Olympic medal at this year's games in Tokyo, Japan

The Pan American silver medallist is proud of his overall accomplishments in 2019. He is, however, dissatisfied with his performance at the World Athletic Championships in Doha.

"Considering all things, last season was my best season. The only thing that I was disappointed in was the World Championships which was the only place that I actually threw bad," Smikle told STAR Sports. "But you know everything happens for a reason. I take it as a learning curve and I'm moving forward into 2020."

The 27-year-old Smikle's season was highlighted by his second place finish at the Pan American Games in Lima, Peru last August with a distance of 65.02 metres. He finished behind training partner Fedrick Dacres who won gold with a Pan American record throw of 67.68m.

Smikle's performance in Lima earned him a place among the five nominees for the RJRGLEANER National Sportsman of the Year. But he was below par in Doha. He failed to reach he final, after only managing 62.93m in the preliminary round. Smikle says that the priority for him now is analysing and correcting his errors to get back to his best.

"It's about learning from your mistakes, going back to the drawing board and a better athlete," he said.

Part of that learning process according to him will be training to achieve great form in time for this year's Olympic Games in July, with the focus this year on not paying much attention to posting strong results at the beginning of the season.

"Right now it's really about preparing properly for when it really counts. Normally I would open big and it would be good to throw far early out in the season but I am taking a different approach because I want to have a fruitful season so that at the end of it, where it really counts, I will deliver," he said.

He hopes that his new mindset will led to an appearance on the podium in July.

"I want to be a medal contender so I'm going to do my best," he said.