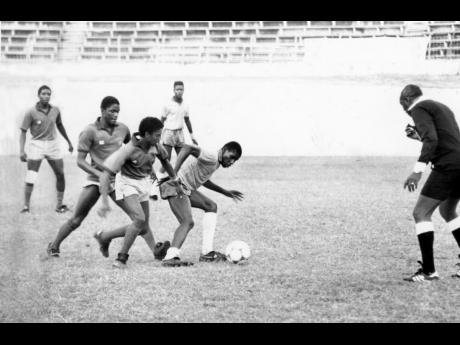 SHIELDING: Rusea’s Fabian Lawrence (right) gets his body between the ball and two St Andrew Technical players during the Olivier Shield play-off at the National Stadium in December 1987.

Fabian ‘Pirate’ Lawrence, one of the stars of the all-conquering Rusea’s High School 1985 football team, which won them nation’s only schoolboy football grand slam (daCosta Cup, Ben Francis Cup, Nutrament Shield, and Olivier Shield) was shot and killed at a construction site, in Montego Bay, where he was allegedly caught stealing.

The gifted midfielder, who played alongside Linton Stewart, Mark ‘Haglar’ Wilson, Michael Graham, Aaron Lawrence, the late Stephen ‘Shorty’ Malcolm, and Caple ‘Corntail’ Lawrence, who all went on to represent Jamaica at the senior level, had fallen on hard times in recent years after developing a drug habit.

“He was rich in talent and had the potential to become a bona fide star at the senior level,” said Linval Graham, a friend, who watched Lawrence’s evolution from primary school star to high school standout.

“I cried tears when I found out he was on drugs and had broken away from football,” said Graham.

Interestingly, when he graduated from Rusea’s, where he played three consecutive years in the daCosta Cup and other major competitions, he left with the enviable distinction of arguably the most accomplished player in the annals of local schoolboy football, based on the number of trophies won.

Lawrence, the son of legendary Montego Bay street vendor, the late ‘Heavy’ Perry, had the world at his feet after he graduated from Rusea’s. He promptly became a star in St James domestic football, first representing Defenders FC from his Green Pond home community, before moving to African United and then former national champions Seba United, now Montego Bay United.

Things began to unravel for Lawrence when, because of bad associations, he began dabbling in cocaine, a habit that derailed his ambitions to represent Jamaica and become a professional footballer. He soon began having run-ins with the law, which resulted in him being incarcerated on a few occasions. The last time in got into trouble, he made a public plea in court for help.

“I asked the judge to help me … I told him I was not doing well on the street but that prison had not helped,” Lawrence told The Gleaner in 2011. “The judge decided to send me to Teen Challenge (an organisation that seeks to help addicts) in Ocho Rios. It was there that I slowly began to win the battle against crack.”

However, with his dreams of becoming a coach when he returned to Montego Bay not materialising, Lawrence resorted to doing odd jobs on the streets, drifting in and out of the drug world.

“He was a very competitive person, but somehow he never managed to beat that cocaine habit and it really pains my heart to see him taken out like that,” said Graham. “I wish he had the support structure to beat the habit.”