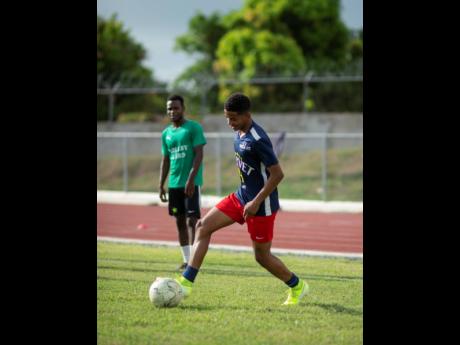 At just 15 years old and entering his second year of Manning Cup, Jamaica College's (JC) Duncan McKenzie is obviously a player who likes to punch above his age group.

Having already bagged his first goal on Saturday, McKenzie is ready to become a main fixture of this ISSA/Digicel Manning Cup season.

It was only back in 2017 when McKenzie captained his school's Under-14 team with class that belied his age, and the journey for the young player has been indescribable since.

"I think it has had a positive impact on my football for sure. I can see where I've really improved," McKenzie said. "I needed to become stronger, faster, and to move the ball quicker. My speed of thought has improved, and overall, my game has lifted."

Entering his maiden season last year was a daunting challenge for the youngster, but one he met unhesitatingly.

The highlight of his season was a stunning goal against Campion College in the first-round group fixtures.

With that experience under his belt, McKenzie is ready to play his part to help JC return to winning ways.

"The preparation has been good. I feel good, and overall, I have been playing really well right now," he said. "I believe that we can go all the way and win all three titles: the Manning Cup, Olivier Shield, and the Champions Cup."

McKenzie is also hoping that the experience he will have gained from this, as well as his time playing for Real Mona in the KSAFA Super League, will be enough to boost his chances for a youth national selection, an opportunity he narrowly missed out on last time around.

The skilful midfielder is hoping to become a major part of coach Davion Ferguson's plan and to cement his place in the team for the seasons to come.