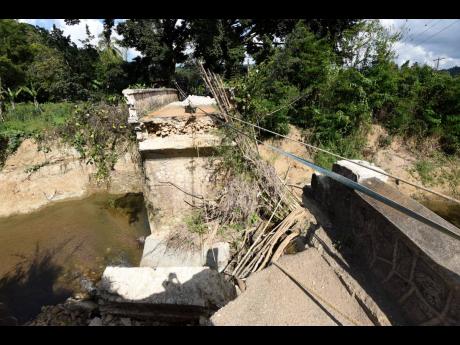 The collapsed bridge in Troy. 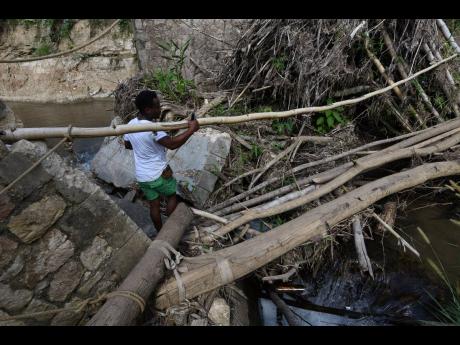 A man tries to make his way across the river. 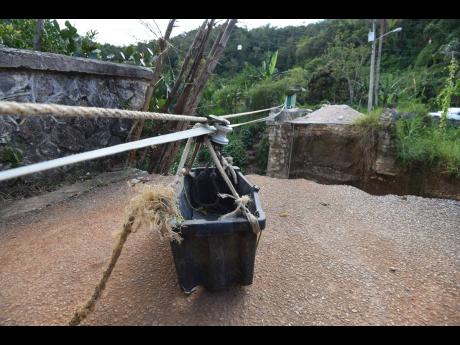 Residents had to use a zipline to get their goods across the river.
1
2
3

Last Friday, Delvin Webby watched in horror as his son Demar was almost washed away as they made their way across a river in Troy, which borders northwestern Manchester and south Trelawny.

Webby said they were forced to try crossing the river, as the bridge that is part of the Oxford to Troy main road collapsed last August. He said he and Demar, 13, were on their way home when the youngster walked on piled-up debris that forms a makeshift bridge. He reached the bank, but lost his balance and fell in the water after the rope that he was holding on to broke.

"The water take him way and put him under one concrete, and mi start wonder how mi a go get him out if him fasten up in deh," said Webby. "A di water wash him out from under di concrete, and mi go 'round deh guh hold on pon him. Right now di whole a mi side bruise off and scrape up. A lucky mi lucky mi never bruk or injure mi ribs dem." Webby said his son was taken to the doctor as a precaution, but thankfully, he did not receive any serious injuries. But he fears that everyone may not be as lucky. Despite the frightening experience, Webby said they had to cross the river again yesterday for Demar to attend school, as he has no money to pay for transport that navigates alternative routes.

"We have to cross it, suh we can't feel 'fraid. Right now mi deh at a spot a try do likkle hustling and rain set up, so mi have to try make it over before the river come dung. Even if river a move normal, yuh have to know what you a do or the water will kick whey yuh foot," said Webby. "A storm season we inna ya now so, we a go block up di road a morning because we can't live suh. When di bigger heads dem come, mi all show dem how mi side dig out. It can't tan suh, because nobody can't cross it when rain fall; and dem can barely cross it when di time dry."

Though he was able to save his son, Webby, a resident of Cowick Park in Manchester, says he and other residents will be holding a peaceful demonstration today as they have received no assistance.

"From this bridge bruk down, not even piece a stick dem nuh come put up fi hold it fi we go cross. We nah say dem have money to replace di bridge right now, but give we something weh we can gwan work with in the meantime," he said.

Meanwhile, Mikael Phillips, member of parliament (MP) for Manchester North Western, says he is willing to be join the demonstration if it can get the Government to move faster. Phillips said he was last updated by the National Works Agency approximately two weeks ago.

"They told me that they are finishing up all their preliminary work to do the drawing for it, so they can do the estimate. They just gave me a ballpark figure with what they are seeing, that it is going to cost over a $100 million. I am seeing where persons say I should fix it, but MPs don't get money to do infrastructure work like that. I have done everything that is possible as the MP. Remember that the bridge serves Manchester and Trelawny. The bridge is not in Manchester, it is over the river, which is the border for both parishes," he said.