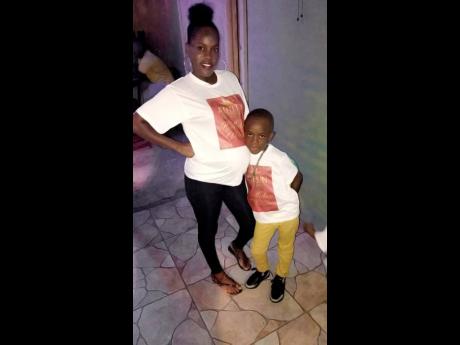 For Monique Estrene, the past 11-and-a-half months have been the worst in her life as she copes with the loss of her son Jaheim Bogle, whose life was snuffed out by a single bullet as he rode his bicycle in Arnett Gardens, St Andrew, last July.

"It hard mi a tell yuh. Dem say time heal itself but this can never heal. Anywhere mi go it affect me same way cause the pain is really hard," said Estrene, 31. "Mi miss mi son, mi miss how him would run come and hug me up and kiss me. All when him give trouble and mi say mi a go beat him, him hug and kiss me same way. Losing my son is like losing everything."

Estrene, who is a security guard, said the death of Jaheim, who was an 'A' student at Iris Gelly Primary School from which he would have graduated yesterday, has even caused her to question if God was punishing her.

"A dem question yah mi find myself a ask. Me a wonder if true me is not a Christian why him don't give me the answers or wah, because every minute mi ask why dem affi kill me son?" she asked. According to Estrene, who also has a daughter, Jaheim was looking forward to migrating to the US and talked about being either a soldier, firefighter or a pilot. But those dreams were snatched away by perpetrators travelling in a motor car who fired on a group of men. Jaheim was unfortunately hit in the head.

"Nobody don't know what I am going through but the pain, the pain is killing me inside. Mi affi try keep me mind occupied all the time in order to avoid breaking down. Yuh see from me lose mi son, mi no know if mi no have any remorse for nobody again. It come like my heart is totally empty," she said.

Head of the Kingston West Police Division, Senior Superintendent Michael Phipps, told THE STAR that the police are committed to resolving the case but are not getting the cooperation they would like from some eyewitnesses.

"We haven't closed that case, that is still very much an open investigation and my men are very active on it because even us as lawmen are moved by the nature of the kid's death," he added. The police are appealing to anyone with information to contact the Denham Town police at 876-922-6441, Crime Stop at 311 or the nearest police station.