JCF’s top recruiter always on the lookout for new talent 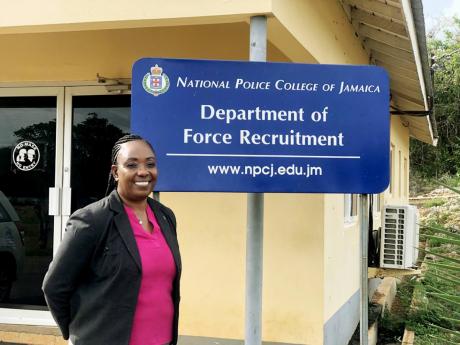 It could be assumed that the weekly theft at the Regent Street Basic School foreshadowed Deputy Superintendent Dian Bartley's career with the Jamaica Constabulary Force (JCF).

"Every Monday morning, there was a break-in at the school. They would be stealing things from the school and this was in the 1970s. So I would always be that person, leading the throng to the Denham Town Police Station. All the little children were marching down to the station and I was the one in the front, leading them," Bartley shared, laughing. Bartley serves as chief recruiting officer of the JCF and her tenure in the force spans 28 years today, having entered the force on June 16, 1994.

Bartley, a mother of two, admitted that she initially thought of becoming an attorney-at-law. But after having her first child in 1990, she applied to the Sam Sharpe Teachers' College where she only completed a year of studies. By 1992, Bartley applied to the JCF and was accepted two years later.

"To go to teachers' college, yes, I would be getting a career I am sure, but at the end of the day, how do I take care of my family? Policing afforded me that opportunity, a job and at the same time, I was training and getting paid. That for me was the catch. I wanted something with permanence and stability and the JCF beckoned. What attracted me was the love for law and order, the love for justice and I have always been an advocate for justice," she said.

After being enlisted, Bartley was posted in Clarendon and was in charge of the youth clubs. She was promoted in 1997 to acting corporal, as the rank was known at the time. Bartley indicated that she served in the force alongside her father Samuel Bartley when he was a special constable. Bartley is a trailblazer as she was named the first female general secretary of the Police Federation and was the divisional intelligence manager in Clarendon. She was also put in charge of Hayes, one of the parish's crime-prone areas.

Since 2018, the Merl Grove High School alumna has been tasked with enlisting able-bodied and suitably qualified persons into the constabulary, who will then undergo training to fully prepare them. Her target this year is to recruit 1,300 people which she has already started by targeting school youth. Bartley said this has already garnered positive results.

"There is so much 'hemming and hawing' about youth who are unattached and there is always a label to say that 'By the time they reach a particular age, they are no longer interested in that' or 'Society pulls them one side'. So you have to offer them hope and we have to also make them believe that they are the hope, the hope that this country rests on, and how best to do that than to come and serve," she said. When THE STAR visited her offices at the National Police College of Jamaica in Twickenham Park, St Catherine, Bartley and her team were preparing for an upcoming recruitment drive at Guy's Hill High School this weekend.

She dispelled the myth that once a potential candidate is academically qualified, they can skip the physical aspect of the process. The Lionel Town, Clarendon, native stressed that both aspects are important, emphasising that the job requires brain and brawn. And although the recruiting process carries much paperwork that takes hours, her broad grin signals that she has no intention of leaving the team any time soon. Bartley, who holds of a bachelor's degree in social work from The University of the West Indies, Mona, wants to expand her team.

"There is never a dull day in policing, no two days are the same, absolutely none. For me, it is the love of people and wanting to impact young lives that keep me going. I have strong support from my team and my family and I think it inspires me."