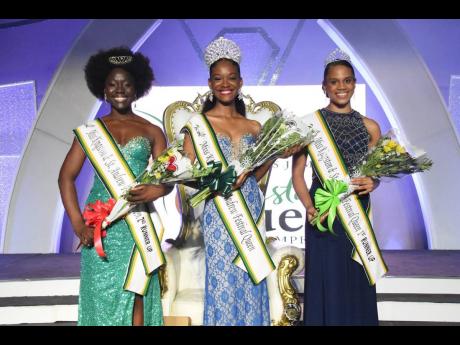 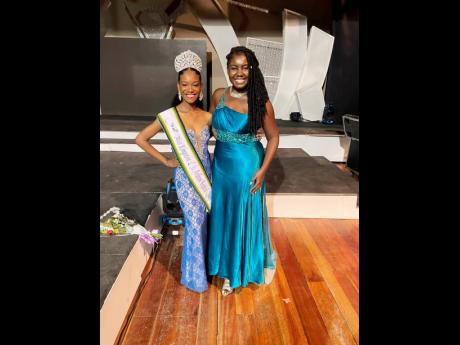 Armed with a burning desire to be a cultural ambassador for Jamaica, it came as a 'no-brainer' for Velonique Bowen to enter this year's staging of the Miss Kingston and St Andrew Festival Queen competition.

"Everyone who knows me, knows I love culture. I consider myself a nationalist, I love Jamaica and I love all things about my culture and so I knew that if I wanted to do a pageant, it would have to be something like this," said the 22-year-old who took the crown on Sunday night. After being announced as the winner, a starstruck Bowen mouthed 'Thank you Jesus', while being sashed by her predecessor Tamoy Campbell. Now the St Andrew High School for Girls alumna is eager to take the national title in August.

"With the national title, I am aiming to bridge the cultural gap that I think exists between our youth and the older population. Cultural ratio I think is a real thing and I think it is a result of globalisation. So we find that our people are watching Netflix as opposed to watching Jamaican plays or Jamaican films. I want to use my skills as a communications strategist to launch educational culture campaigns using social media and other platforms, to communicate the message to ensure that the culture is perpetuated and retained over another 60 years," she said.

Bowen, a journalist, admitted that she was a bit apprehensive about the pageant, emphasising that although waltzing across a stage and presenting a talent piece was similar to her job, it was totally different. Despite this, she welcomed the challenge and saw it as the best opportunity to prove her patriotism and appreciation of the rich culture. In addition to the crown, Bowen copped three sectional prizes: Most culturally aware; Most popular on social media: and Most involved in her community. The latter came through her own television feature called 'Missing', which is aimed at sensitising the public of missing persons as well as organising counselling for returned children and their parents.

But her journey to the crown was not easy, as she juggled being an entrepreneur and a full-time graduate student at The University of the West Indies, Mona, reading for a degree in cultural studies.

"I had training practically every day and that training was excellent. I had some of the best trainers from question-and-answer, to talent, to walk and poise. They really helped to nurture me, to groom me and so I think they are a big part of why all 12 ladies did so well. The journey to the crown was hectic, but I enjoyed the experience," she told the news team.

She wooed the audience and the judges at the grand coronation show held at the Little Theatre with her talent piece called 'Back to Life'. She explained that the piece, which she deejayed, told the story of a notorious gang leader who was being released from prison having completed a 25-year prison term for several crimes.

"The song, I like to call it a bildungsroman because it shows the growth of the character and would've communicated that 'Yes, he would have done all of that in the past but now he is reformed' and I credit that to the rehabilitation that would have been done in the prison. Correctional facilities are for punishment, but at the same time, they are for rehabilitation and I wanted to communicate that in a creative way," Bowen explained.