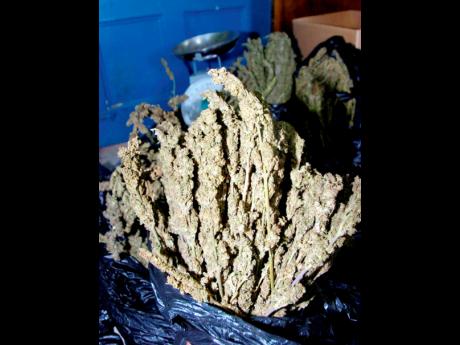 A 41-year-old Corporate Area woman, who pleaded guilty to drug-related offences in the Kingston and St Andrew Parish Court on Tuesday said that she was intending to sell the substance out of financial need.

Ann-Marie Farquharson pleaded guilty to possession of and dealing in ganja. The substance is said to weigh a pound and five ounces. However, her confession did not come easily.

"I am asking you, was ganja found in your handbag?" Senior Parish Judge Lori-Anne Cole-Montaque asked for the final time after several previous attempts.

"Yes, it was in a bag like this," said Farquharson, pointing to the bag she carried to court.

"So why you tell me you not guilty before then and now you say them find it in your bag? Do you think I am going to send you to prison for weed?" Cole-Montaque pressed.

The investigating officer reported that on May 9 at 2 p.m. while on patrol in the Parade Gardens community of Kingston, Farquharson was observed acting in a suspicious manner. When the lawmen stopped and searched her handbag, a large black plastic bag was removed with what appeared to be vegetable matter resembling ganja. She was informed of the offences and when cautioned, Farquharson said: "Offica, mi just collect it from me boyfriend a look a sale fi it."

The police indicated that she was again cautioned, and she said: "Offica, a tru nutten nah gwan, enuh." After being arraigned on the charge of possession, Farquharson broke down in tears. Cole-Montaque sympathised with her, reasoning that Farquharson may have been nervous having found herself before the courts for a second time, the first being for breaching the Disaster Risk Management Act.

"What were you doing with so much ganja? You were selling it? Pull down your mask let me see your face, what you doing with suh much weed?" she asked. Farquharson began explaining that she was a mother of three children and also cared for her two grandchildren, and that she tried to provide for them. But her explanation was cut short as the judge interjected.

Cole-Montaque then instructed the defendant that she will impose fines totalling $24,000. Farquharson is to return to court on July 25 for sentencing.