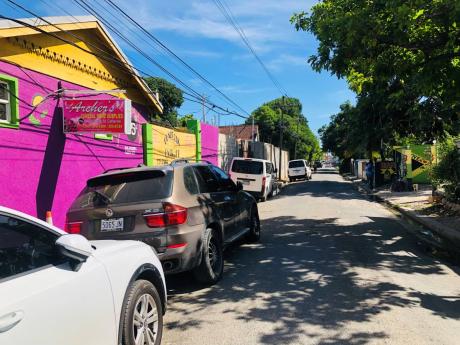 Archer’s Funeral Home in Spanish Town, where the autopsy on controversial pastor Kevin O. Smith was carried out.

On what residents describe as a usually very busy road, the only life that could be seen on Young Street yesterday morning were members of the security forces, mortuary workers, and those members of the public dealing with the business of their own deceased loved ones.

Residents felt this 'extra attention' was because the autopsy for alleged cult pastor Kevin O. Smith was being done at Archer's Funeral Home in Spanish Town.

One woman who lives across from the funeral home, says she has never been afraid to leave her house until yesterday. She told THE STAR that she would regularly walk the street but opted to stay inside.

"Mi nuh usually mix up inah duppy business or fraid no certain way, enuh. But me nuh know wah kinda black magic him have so mi just a gwaan keep my likkle distance and watch wah a gwaan," she said.

One elderly man who frequents a nearby bar said that he has had his fair share of paranormal experiences and refused to have another with the infamous pastor.

"When me used to live a Tawes Pen you see, mi used to haffi come out before 5 o'clock fi catch the bus weh come wid paper, cause me used to sell STAR fi mi mother you know. One morning me deh out deh and me just see one white figure cut it cross the road. You see after that, cyah ketch me out deh without me whites inah mi back pocket. So me hear seh dis yah man yah a come a my foot today me not even a look over deh cause me nuh like duppy."

While residents were vocal with their fears, some morgue workers say they were unafraid to handle Smith's body. It arrived approximately 7:30 a.m. and remained until 1:29 p.m. when it was collected by Madden's Funeral Home.

Another worker said: "We cut dead every day suh we nuh fraid fi cut. Only the bag a excitement new," referring to the increased police presence and the media.

Smith met his grim end on Monday, October 25, just one week after he was apprehended by the police following a suspected sacrificial ceremony that led to the death of three people at the Pathways International Kingdom Restoration Ministries in Montego Bay, St James.

Smith was in a car accident on the Linstead Bypass while being transported from St James to Kingston where he would have been charged for murder along with other offences. The autopsy determined that he died as result of blunt force trauma.

The autopsy of the body of Constable Orlando Irons, who died in the same crash, also determined that he died as a result of blunt force trauma.