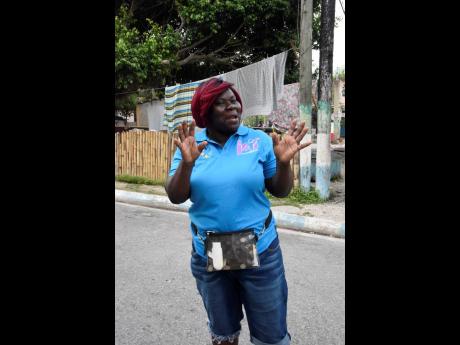 Annette Hawthorne has lived in the African Gardens community in August Town, St Andrew, since she was a child. She has seen her share of violence in the community, and is playing her part to try and end that cycle by being a guiding hand to the youth of the community.

The Jamaica Social Investment Fund, in partnership with the St Andrew Central Division, August Town Police Station, August Town Community Development Council and other stakeholders, have invested in the Police-Supervised Curfew Monitor project as part of a wider strategy of the Government of Jamaica under the zone of special operations, which was initiated back in July 2020.

"When me see them (children) pon the road during school hours, some respond, some nuh respond, suh me get to them parents and tell them there is a curfew monitor programme in this community, 'cause some people nuh aware of it," Hawthorne told THE STAR.

"It start from January. They take us on a workshop and expand our knowledge on how fi deal wid children and communicate with them caah yuk know seh them nuh hard fi deal wid."

Hawthorne says that since the start of the programme, some in the community have labelled her an 'informa', but she says that doesn't faze her.

"We try fi work wid the parents. Some respond, some nuh tend fi respond. So me say, okay, we gon deal with the police then. So some a dem call me informa. Well, me say I care zero, I need betterment for my community. And if you not going to school, what's your plan?" she said.

Chosen for her firm personality, Hawthorne says she was told her influence would be good for the community and she would effectively instil order.

"Them say me stern. Inna we community a my verandah this. Where me live in the lane, mi nuh have a verandah, so I sit here. Even during the curfew hours I'm here, so even when the police a pass I say, 'Officer, I don't live in Beverly Hills, so this is my yard.' A Beverly Hills them have them metal fencing and them stone wall, we nuh have none. So a yasso me a sidung and breeze out. Sometime me and dem talk, so them say me a one a di best choice fi down here 'cause people will listen to me," she said.

Hawthorne said that since becoming a curfew monitor, she has helped at least 10 children to stay out of trouble.

"I'm still here and mi nuh have nuh intention fi leave. I grew five kids here and I never have nuh problem. Them did know the type a mother them have, 'cause everybody know Annette," she said. Curfew monitors are trained in several areas, including customer service, childcare and protection, effective parenting, leadership, and dispute resolution and mediation.