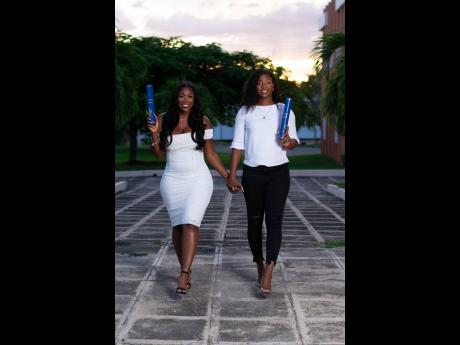 Rocked by the death of their mother Hilda, the Robinson sisters, Jody-Ann and Stacey-Ann, with the love and support of their father Edward, banded together to ensure they achieved academic success to honour their mother's memory.

They recently graduated from the University of the West Indies (UWI), Mona, after achieving master's degrees in economics and corporate finance. The sisters have always been academically gifted and Edward told THE WEEKEND STAR that after their mother died in 2000, he knew he had to do his best to play both parent roles to make sure they stayed on track.

According to Stacey-Ann, 26, their father even abstained from relationships so he could focus on providing for his family.

"He put a lot on the line for us and I'm even talking relationship wise. I remember he used to say to people, 'mi nuh wah nuh women. Mi have two woman a mi yaad'. And he kept his promise, he did not get in another relationship until we had finished school," she said.

This was just one of the many sacrifices Edward made for his girls. He said that the family often had to eat simple meals due to financial constraints.

"Sometime mi a tell you di truth, enuh, sometime when it come to all the food, enuh, sometime mi nuh have it. Sometime a just dumplin and butter or rice mi coulda find and dem just say all right. Sometimes mi even ask them weh dem wah fi dinner and dem woulda say rice and butter just cah dem know a dat mi can find," he said. They also credited their older brother Andrew for making sure they wanted nothing.

Jody-Ann, 25, graduated with 12 A's and a distinction, and while Edward says he doesn't fully know what that means, he is beyond proud of his two daughters.

"Bwoy, I cyah even tell yuh how I feel. Man, me a tell you, any time mi think 'bout it cold bump come up man. Them make me feel so good," he said. Stacey-Ann says she is particularly happy about their achievements because she remembers how some relatives treated them badly after their mother died.

"I remember when I graduated from undergraduate. He cried because he was so happy, because of how people spoke down to us and how people discouraged him and said how you going to manage with two girl pickney and stuff like that."

"The conversations that people had about us, he's just happy that he never let it get to us and I'm so happy we've made him proud," Jody-Ann agreed. Currently, the sisters are both employed and are doing their best to help their father and brother.

Jody-Ann, currently an assistant lecturer at UWI, has expressed a desire to pursue her PhD and is working towards that. Stacey-Ann, a loan officer at JMMB, says that while she would like to also continue her studies, she intends to continue working so she can help her sister pay for the degree.

"For me, same like how my brother sacrificed for me, I thought it fit to sacrifice for her. It wasn't gonna work for both of us to be going to school full-time only, so I decided to get a job to support her," she said.