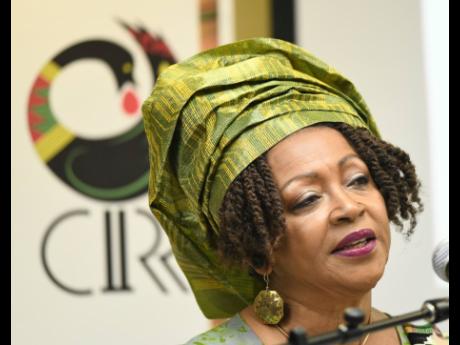 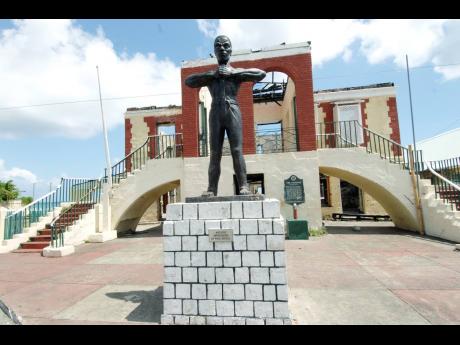 The statue of Paul Bogle was damaged by a man, said to be of unsound mind. Although it has been restored, residents have objected to it being re-erected, arguing that it does not bear the likeness of the national hero.
1
2

Social historian Professor Verene Shepherd has called for the construction of a 'Wall of Honour' for men and women killed in the Morant Bay Rebellion in 1865.

Shepherd, speaking at an event in St Thomas to commemorate the pivotal events of 156 years ago, said a new Paul Bogle statue should be erected in the parish as well as a wall with the names of the martyrs of the rebellion.

"Every 11th of October, we either come here or we gather in other spaces and we big up the martyrs. We read their names. Where can people go to pay respect to these martyrs?" she asked.

"I am calling for the Paul Bogle monument, a more realistic one, not the one that look like Mr Bagan, to be put back up somewhere. I would ask for a wall of honour, with all the names right in front of the old courthouse."

Sheperd also called for the Government to refurbish Bogle's church in Stony Gut, transform the courthouse into a museum, and to create a Kumina Square in the parish.

A statue of Bogle, which was sculpted by Edna Manley, was placed in front of the Morant Bay Courthouse. The statue was damaged by a man, said to be of unsound mind, and had to be removed by the Jamaica National Heritage Trust for restoration.

However, plans to remount a statue in honour of the national hero had to be called off after residents of the parish said it was not in likeness of Bogle.

Manley's sculpture was of Philip 'Bagan' Bogle,who was said to be a descendant of Bogle, by way of his daughter, Cecelia.