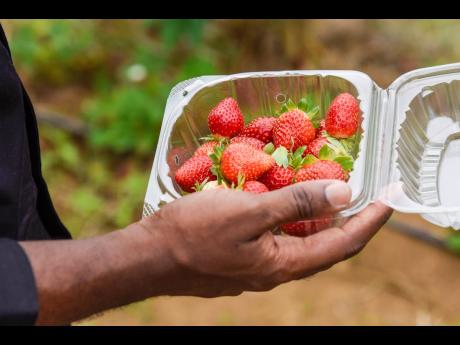 Ninety per cent of the strawberry consumed in the country is imported, and Delano Grant is determined to help increase local production. 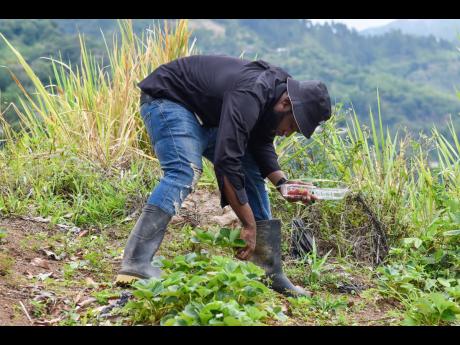 Delano Grant, 25, has been growing strawberries since last summer. 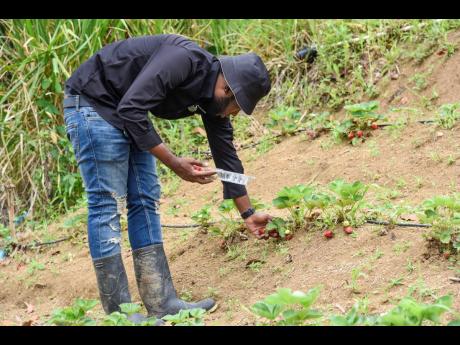 Delano Grant started farming due to the pandemic and a personal desire to create another stream of income. 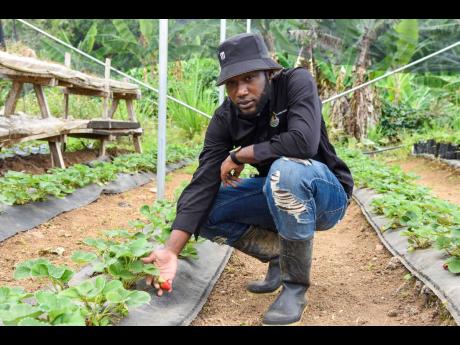 Delano Grant pays keen attention to his fragile plants, ensuring that they are watered daily and sprayed regularly to ward off pests and insects. 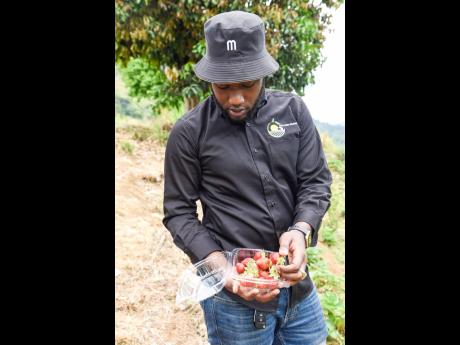 Away from the bustling metropolitan life of the Corporate Area, peace and tranquillity await residents in the valleys of the Blue Mountains.

The lush landscape and fertile land provide great opportunity for residents to till the soil, and Delano Grant has been reaping the fruits of his labour. Grant is a native of Mount Lebanon, a quiet farming community just an hour's drive from Papine, where he grows delectable strawberries.

The vibrant red fruit, which is largely imported into the island, has proven to be a sweet venture for Grant. Neatly placed in rows, close to blueberries and pineapples, the 25-year-old admits that he started farming due to the pandemic and a personal desire to create another stream of income.

"I started in the summer of 2020, and I started because among my group of friends, we want to own businesses. So I decided that I have the land and the resources but I didn't know what I would plant at the time. I know that my cousin, Anipe Cripps, farmed strawberries and he profits from it, so I decided to go that route as well," Grant said.

His excitement could not be contained as he says that the unique fruit is a delicacy and one that everyone craves, not only for Valentine's Day.

Farming is not uncommon for Grant, as his mother Dorene Headlam was also a coffee farmer. He inherited three acres of land when she passed in 2012.

The Excelsior High alumnus says that his journey to becoming a strawberry farmer has been tedious. First he cleared the land, then gathered 1,000 strawberry seedlings from the Rural Agricultural Development Authority. He confesses that the three months in which he had to nurture his plants were the longest, but the sight of his rosy fruits were worth the wait. To prove their taste, he engaged the news team in testing his delicacy - their taste is one to savour.

"I can remember the first time I reaped, it was a Saturday morning in December. I reaped from those two last rows and I had about a half bucket filled when I finished those two rows. You know like being a kid and your mother bring home a toy? It was just a joyous moment," he said, a grin plastered on his face.

Grant says that he enjoys being on his farm, not only to reap the fruits of his labour, but to enjoy the therapeutic session it provides. The breathtaking view of the hillside, coupled with the fresh, crisp morning air is one that Grant would never trade.

To produce the sweet fruits, Grant pays keen attention to his fragile plants, ensuring that they are watered daily and sprayed regularly to ward off pests and insects.

His products have a starting price of $1,000 per pound, and Grant says he has great demand and so is eager to increase the supply.

"I am looking towards expansion, having a bigger farm, but it's a work in progress. I've seen that it is benefiting people and I get positive feedback about the produce and I feel good that I am doing good for the community and the economy overall because Jamaica only produces 10 per cent of strawberries locally, so you know that the other 90 per cent is imported goods and I am a part of that, if it's even 0.1 per cent," he told THE WEEKEND STAR .

Grant, the proprietor of Deloss Farms, has his eyes set on venturing into sorrel farming, with the possibility of other exotic fruits such as lychee, as well as producing fruit jams. He intends to install an irrigation system.

"I would encourage young persons to do farming, but most persons don't have the patience, and with farming you have to be patient, committed, have the will, and consistent. When I just started, I said, 'Weh me a do to myself because sun hot', but I stayed committed, wore my overalls and boots and stayed hydrated. Eventually, I would do farming full-time but everything takes time," he said.