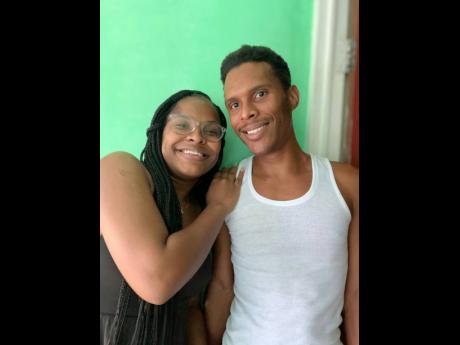 Romario Manning and his sister Nyoka.

The family of 26-year-old Romario Manning is breathing a sigh of relief after their pleas for help in getting him transferred to an intensive care unit (ICU) were answered on Tuesday night. The family's plight was highlighted in THE STAR that day.

The Manning family had pleaded for the public's assistance in raising funds to have him transferred to an ICU at Hospiten in Montego Bay, as they were told that there was no space at the units in other hospitals. Manning was hit from his bicycle in Belmont, Mocho, in Clarendon, last Friday. The accident left him paralysed from the left shoulder down, and suffering from memory loss due to trauma to the head. He also has a broken leg and an injured spine.

Romario's sister, Nyoka, told THE WEEKEND STAR that the family received a call from the UHWI (University Hospital of the West Indies) around 7 p.m. on Tuesday, indicating they could accommodate Romario, who needs at least three life-saving surgeries.

"We were so happy ... we started to jump for joy [and] rushed to the hospital to see him off. He was transferred successfully by 12 a.m.," Nyoka said. She said her brother, who was briefly placed in an induced coma, had started communicating.

"He is moving his lips to talk and we are understanding him to communicate. He also asked for his phone so that he can listen to music," she said.

"The doctors placed a traction on my brother's head in order to stretch his neck and return it to its proper position. They said they're monitoring his vitals and hoping his vitals get to a point where he'll be able to handle the necessary surgeries," said Nyoka, who noted that her brother's heart stopped beating on Wednesday, but doctors managed to resuscitate him in less than two minutes.

"We have jumped over one hurdle to get him into an ICU at UHWI but now we are at another hurdle, to ensure he has a successful surgery and healthy recovery. But I know God is working on him," Romario's mother, Genieve, told THE WEEKEND STAR. The family also thanked members of the public for their support.