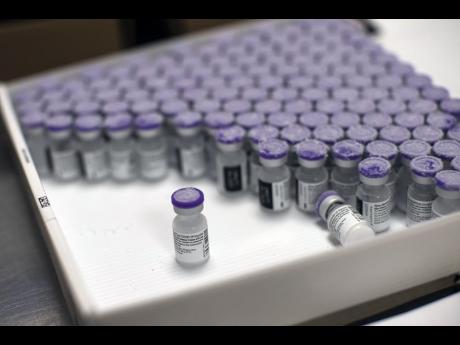 In this Monday, Jan. 4, 2021 file photo, frozen vials of the Pfizer/BioNTech COVID-19 vaccine are taken out to thaw, at the MontLegia CHC hospital in Liege, Belgium. (AP Photo/Francisco Seco, File)

MAWGAN PORTH, England (AP) — One year ago, the U.S. was the deadliest hotspot of the COVID-19 pandemic, forcing the cancellation of the Group of Seven summit it was due to host. Now, the U.S. is emerging as a model for how to successfully recover from more than 15 months of global crisis.

In a speech Thursday on the eve of the summit of wealthy G-7 democracies, President Joe Biden will outline plans for the U.S. to donate 500 million vaccine doses around the globe over the next year, on top of 80 million doses he has already pledged by the end of the month.

The U.S. has faced mounting pressure to outline its global vaccine sharing plan, especially as inequities in supply around the world have become more pronounced and the demand for shots in the U.S. has dropped precipitously in recent weeks.

“We have to end COVID-19, not just at home — which we’re doing — but everywhere,” Biden told American servicemembers Wednesday on the first stop of a three-country, eight-day trip, his first since taking office. He added that the effort “requires coordinated, multilateral action.”

The new U.S. commitment is to buy and donate 500 million Pfizer doses for distribution through the global COVAX alliance to 92 lower-income countries and the African Union, bringing the first steady supply of mRNA vaccine to the countries that need it most.

A price tag for the 500 million doses was not released, but the U.S. is now set to be COVAX’s largest vaccine donor in addition to its single largest funder with a $4 billion commitment.

White House officials hope the ramped-up distribution program can be the latest example of a theme Biden plans to hit frequently during his week in Europe: that Western democracies, and not rising authoritarian states, can deliver the most good for the world.

White House officials said the 500 million vaccines will be shipped starting in August, with the goal of distributing 200 million by the end of the year.

The remaining 300 million doses would be shipped in the first half of 2022.

“We’re in this position because we’ve had so much success at home vaccinating Americans,” White House press secretary Jen Psaki told CBS News on Thursday.

After leading the world in new cases and deaths over much of the last year, the rapid vaccination program in the U.S. now positions it among the leaders of the global recovery.

Nearly 64% of adults in the U.S. have received at least one vaccine dose and the average numbers of new positive cases and deaths in the U.S. are lower now than at any point since the earliest days of the pandemic.

The Organization for Economic Cooperation and Development last week projected that the U.S. economy would grow at a rate of 6.9% this year, making it one of the few nations for which forecasts are rosier now than before the pandemic.

U.S. officials hope the summit will conclude with a communique showing a commitment from the G-7 countries and nations invited to participate to do more to help vaccinate the world and support public health globally.

Officials say a quarter of that excess will be kept in reserve for emergencies and for the U.S. to share directly with allies and partners, including South Korea, Taiwan and Ukraine.

Global public health groups have been aiming to use the G-7 meetings to press wealthier democracies to do more to share vaccines with the world.

But many in his own administration acknowledge that the restrictions were not the driving cause of the global vaccine shortage, which has more to do with limited manufacturing capacity and shortages of delicate raw materials.