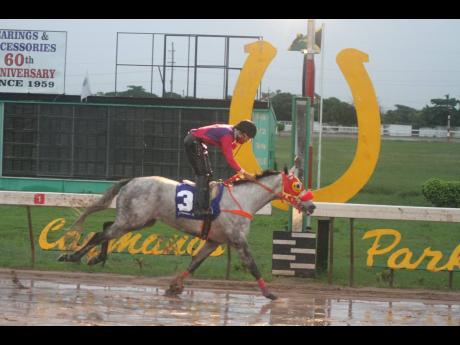 FILE Raddesh Roman, aboard Roy Rogers, was first past the post in race No. 11 for the Kenneth Mattis OD Memorial Trophy, the featured race of the day at Caymanas Park on Saturday November 7, 2020.

ROY ROGERS has the ideal draw and weight allowance to run rivals off their legs in Sunday's 'Lindy' Delapenha Memorial at a mile, sitting plumb at post-position two with 117lb, with the only possible matching speed being HARRY'S TRAIN.

An eight-length winner when last in overnight company in November, dismissing BIGBANG and COCO CHANEL at nine furlongs and 25 yards, ROY ROGERS is a relentless frontrunner, who has mixed it up with the best of the best.

Trainer Dennis Lee sticks to the script, hardly departing from a claiming rider to give his fearless front runner every chance on the lead, retaining Nicholas Hibbert, who was aboard when the grey tackled open allowance company last time out at the exact distance.

With Hibbert astride, ROY ROGERS chased none other than ENGLAND'S ROSE and SUPERLUMINAL into the lane on last, relegated to fifth a furlong out but rallying to finish third in the event won by CRIMSON MAGIC in a driving finish.

It should be noted that ROY ROGERS finished ahead of ENGLAND'S ROSE, who was being touted as a likely winner until the pace and distance took a toll on her inside the last furlong.

Hibbert has only HARRY'S TRAIN to worry about on the lead. HARRY'S TRAIN served as a rabbit last time out for stablemate SUPERLUMINAL, who pounced off the turn and was making his way home before CRIMSON changed leads and mowed him down.

HARRY'S TRAIN, running light at 109lb, will try unsettling ROY ROGERS on the lead for stablemate COCO CHANEL but whether Ricardo Duhaney is able to pull that off is left to be seen.

The closer with the best class is 2019 Triple Crown winner SUPREME SOUL, who has been lounging around at exercise since last raced two months ago, finishing three lengths behind ROY ROGERS at eight and a half furlongs, down the track, both outclassed in grade one by NIPSTER.

However, SUPERLUMINAL is a grade-one horse again being allowed to run against overnight company, who he beat last July. A horse's rating doesn't change by date, but, instead, by performance, hence he's always dangerous at this level despite his fitness being suspect.

Late-kicking PURPLE WAYNE won on a $650,000 claiming tag two months ago. However, his connections mean business, replacing one co-champion with the other from overnight to final programme, making him one to watch at the weight as an exacta outsider.

BIGBANG proved better than COCO CHANEL and HOVER CRAFT in a top-level claiming race at a mile, clocking a decent 1:39.4. He reports from a new barn, back up in class, but lacks the pace to chase as early as he did among claimers.

UNCLE VINNIE has seemingly improved since claimed. He ran a great race behind SUPERLUMINAL at a mile in December, which, if he repeats, would put him in with a chance, but he reports rather heavy at 121lb.