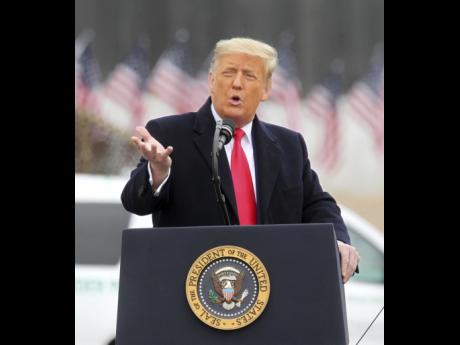 WASHINGTON (AP) — President Donald Trump was expected to spend his last full day in office issuing a flurry of pardons and bidding farewell to the American public from a near-deserted White House and surrounded by an extraordinary security presence outside.

In one of his final acts as president, Trump was expected to grant clemency to as many as 100 people, according to two people briefed on the plans.

The list of pardons and commutations is expected to include names unfamiliar to the American public — regular people who have spent years languishing in prison — as well as politically-connected friends and allies like those he’s pardoned in the past.

Trump also has been using his final days in office to issue steady a stream of executive orders as he tries to lock in initiatives that President-elect Joe Biden is likely to ignore.

Trump has also recorded a video offering a final message to the American people before a farewell event at Joint Base Andrews on Wednesday morning.

Aides had urged Trump to spend his final days in office participating in a series of legacy-burnishing events — speeches highlighting his administration’s efforts to lower taxes, scale back federal regulations and normalise relations in the Middle East.

But Trump, who remains consumed with anger and grievance over his election loss, refused and has not been seen in public since last week, when he traveled to Texas for one last photo opportunity at the border wall he pushed so adamantly throughout his presidency.

Trump has also refused to take part in any of the symbolic passing-of-the-torch traditions that have been the capstones of the peaceful transition of power from one administration to the next.

He is boycotting Biden’s inauguration, passed on inviting the Bidens to the White House for a get-to-know-you meeting.

And it remains unclear whether he will write Biden a personal welcome letter, like the one he received from former President Obama when he moved in.

Denied his Twitter bullhorn and with little else planned, Trump did participate in multiple meetings over the long weekend to discuss pending clemency actions, according to a White House official, who, like others, spoke on condition of anonymity because the action had yet to be made public.

Trump had been expected to move forward with additional pardons and commutations earlier this month, but discussions were put on hold after the insurrection at the Capitol by pro-Trump rioters incited by the president’s fiery and baseless election challenges.

That threw an already paralysed White House into even further chaos.

Trump has since been impeached for a second time.