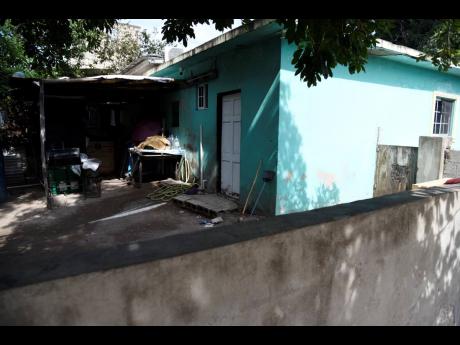 The yard of the house in which Ellia Pascoe and her daughter Notoya were murdered on Sunday.

Ellia Pascoe had just returned from church at the Power of Faith Ministries in Portmore, St Catherine, on Sunday when the lives of her and her daughter were snuffed out.

Pascoe, 52, and her 32-year-old daughter, Notoya, were murdered by a coward who invaded their home at Dewdney Drive in Olympic Gardens, St Andrew, about 11 a.m.

The gate to the yard in which women lived was shut tight when THE STAR visited yesterday. A relative said that other family members moved out, fearing that they too may be attacked.,

"Ellia just come in from church and wake up her daughter who made breakfast. The two sandwiches were there on the table. It look like Notoya come outside and a talk to her mada and whosoever do it just skate the fence and start fire. It look like them run in the house because that's where they were found and Ellia was clutching her daughter like she was protecting her," a relative told THE STAR yesterday.

The two women are among the 69 persons who have been murdered since the start of the year. Dennis Brooks, senior communications strategist at the Jamaica Constabulary Force, said there has been a 13 per cent increase in murders when compared to the same period last year when 61 persons were murdered. Brooks said 42 of the murders are gang-related. The police were reluctant to state a motive for the killing of Pascoe and Notoya.

"At this time, the investigation is at a sensitive stage and we have been following some strong leads and we do have certain important information," Brooks said.

Meanwhile, the relative with whom THE STAR spoke said that a security camera was being installed at the back of the house, but had not been fully operational. She said the equipment was "just a way to secure the home, nothing else".

THE STAR was told that Notoya worked as a librarian at a high school in Kingston on weekdays and a hairdresser on weekends. The relative said that everyone is puzzled and shocked at the killings as the deceased were respected and loved by many in the community.

"They were good people, everyone love them. Nuh war nah gwan in the area and dem and nobody nuh have anything because they were just not that type of people," the relative said.