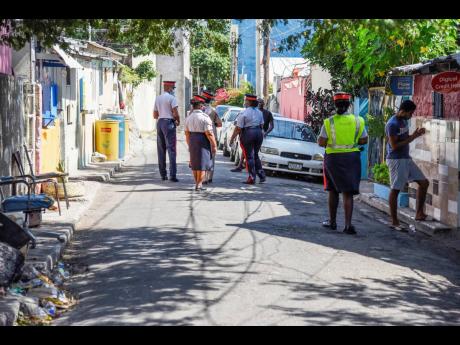 Police maintain a strong presence in Allman Town, Kingston, after Sunday’s murder of three men on Prince of Wales Street. 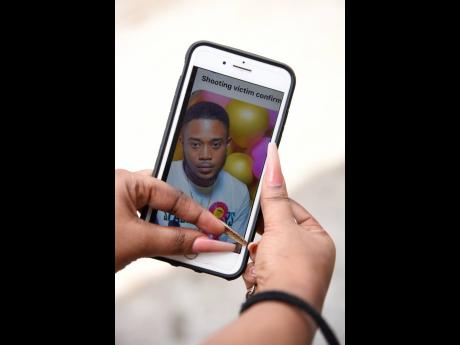 Mario Livingston, 20, was one of the victims. 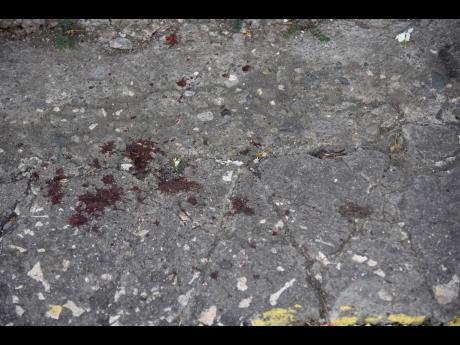 Dried blood drops are a reminder of the carnage that took place when gunmen opened fire.
1
2
3

As two boys passed the scene on Prince of Wales Street in Allman Town, Kingston, where a drive-by shooting claimed the lives of three men, one was heard telling the other 'Mi nuh wah stay here, mi nuh have nuh reason fi stay here'.

A long trail of blood, discarded slippers and a large contingent of security personnel give an idea of the spine-chilling events that unfolded in the area on Sunday night.

Raheim Brown, 21, Konee Foster, 20, and Marvin Livingston, 20, all of Allman Town, were killed when men travelling in a motor car opened gunfire at them about 7:15 p.m. Two other men who were standing on the roadway were shot and injured. Twenty-five persons were murdered across the island between Friday and yesterday morning.

Garcia Nembhard, Livingston's aunt, cried as she told THE STAR that her nephew was murdered just nine days after his first child, a girl, was born.

"Him was a good yute, him was a caring yute. Him just get him baby and the yute love him baby. Him nuh go anywhere leave her. Normally, him would go in by 6 p.m. Him fren dem call him out and him come back outside. Dem go up di road and come back come sidung," she said as tears streamed.

Livingston's babymother opened her mouth to speak to the news team but she hardly had any words. Wiping her eyes with one of her baby's rags, she stated that her child's father was the best there was.

"Him was the perfect father and di best in the world. He was the best ting ever and he was very excited about his baby," she said.

Konee Foster's mother was also too overcome with grief to speak with THE STAR. She along with others are praying that her other son, who was injured in the attack, will survive and make a full recovery.

"Mi can't talk because every time mi tink about it mi break down. All now mi nuh eat or sleep," she said minutes after a team of police officers tried to comfort her.

Although the police maintained a strong presence in the usually lively street, several operators closed the doors to their businesses out of fear.

Sunday's mass attack followed the shooting death of a 80-year-old Ransford 'Dapper' Tucker in the community last Friday. The police have not established a link between the killings.

Imani Duncan Price, the caretaker for Central Kingston, said that the establishment of a zone of special operations in the constituency could help curtail the rise in violence.

"While these two horrific incidents happen very closely together, there have been a spate of murders over the last six months across the entire constituency, and it just has been drive-bys and shootings and murders," she said.