Jamaican in US wants help to replace stolen e-bike 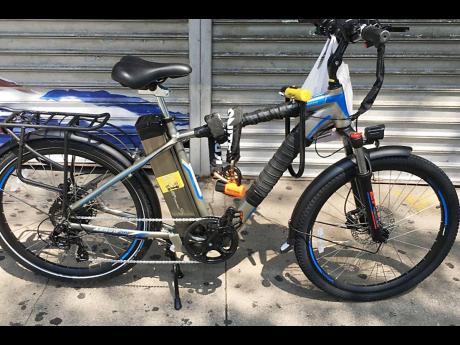 An electric bike relies on an electric motor and battery for movement.

When Garette Gordon bought an electric bike a few months ago, his plan was to supplement the income he was getting as a teacher. The Westmoreland native, who lives in New York in the United States of America, said he spent US$1,800 to buy the e-bike to do Uber Eats delivery.

"I worked outside the home before as a teacher, but the pandemic limited our contact. Hence I had to migrate to and use the platform, ZOOM. This was new for many students and some could not handle the new way," Gordon said, as he explained his decision that led up to the purchase.

"I heard money was being made doing deliveries, and even though I'm educated, I am not ashamed to work any honest job. Thus, I decided to do deliveries on Uber," the Westmoreland native shared.

He decided to venture into delivery as a means of gaining cash, while still doing online tutoring services. However, before he could reap the benefits of his investment, the bike was stolen in Brooklyn, New York.

"It's a shame how the streets of Brooklyn have become dangerous and chaotic. A humble youth, ambitious nonetheless, gets his material possession stolen; a tool that helps to put food on his table and money in his pocket. Losing anything to thieves hurts, especially something so costly and useful," he told THE STAR.

Gordon, who earned a double major in electronics and computer science from The University of the West Indies, said that he also used the e-bike as his alternative mode of transportation, having made the decision to shun public transportation due to the presence of COVID-19.

He is now relying on the altruism of the public to assist him in acquiring a new bike.

"Those of you who know me, know I am both smart and hard-working. I don't deserve to have my e-bike taken away like this," he said.

Gordon has started a GoFundMe account to raise US$2,000 to purchase the e-bike. Since being launched on September 21, only US$40 has been pledged to the cause.

Those willing to contribute to Garette Gordon's new bike my visit https://www.gofundme.com/f/258feex82o.