Mother wants her son to hear 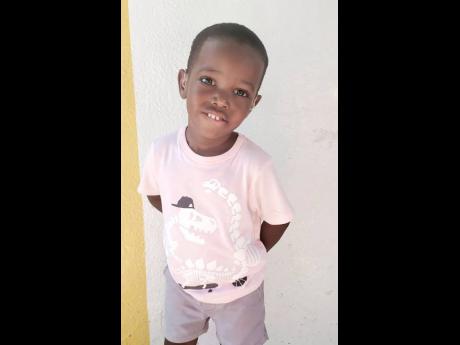 One of Lexcine Witter's greatest wishes in life is to hear her two-year-old son Leandre Forbes say the word 'Mommy'.

Currently, the toddler is unable to utter that or any other word as he has been diagnosed with bilateral sensorial hearing loss and has not developed speech.

The Denham Town mother is seeking the public's assistance in accumulating the J$15 millions (US$146,000) needed for her son to undergo surgery at Johns Hopkins Hospital in the US.

"I love my son dearly. and I believe it is every parent's job to do every and anything in their power to ensure their child takes advantage of any opportunity that may exist which can improve their quality of life. I am appreciative of every dollar that anyone can donate, so I am thanking everyone in advance. I have set up a GoFundMe that has raised US$350 so far," she said.

Witter said that when her son was a year old, she realised that he was not speaking and would not respond whenever they would call out to him.

"He wasn't trying to say words at all, and other babies were advanced, so I decided that I needed to check him out at the doctor, where it was discovered that he had profound hearing loss. He was later fitted with hearing aids to amplify the little sound that was passing through his ears, but further tests determined that the hearing aids would not be enough. He was later diagnosed with bilateral sensorial hearing loss," she said.

Witter said it is imperative that this procedure be done promptly as early intervention is critical for his speech and language development.

She is hoping that her son will be in the US for surgery by early next year.

"His doctors advised that he should have already had implants for maximum efficiency to take effect. However, that window does not close until he is three. But any age after that would make it difficult for the brain to adapt and rewind and do what it is supposed to do because these stages in a baby's life are very important as it relates to development," she said.

Witter said that she doesn't want him to be at a disadvantage, so she has started to send him to a school so he can learn sign language just in case she doesn't get the assistance.

"At the end of the day, I want to know that I did all I could to ensure that he has a fair chance at life," Witter added.

Persons wishing to assist Leandre Forbes may contact his mother at 876-432-6413 or make a contribution at https://www.gofundme.com/f/cochlear-implant-for-leandre.