‘He was a family man’ - Manchester business operator shot dead 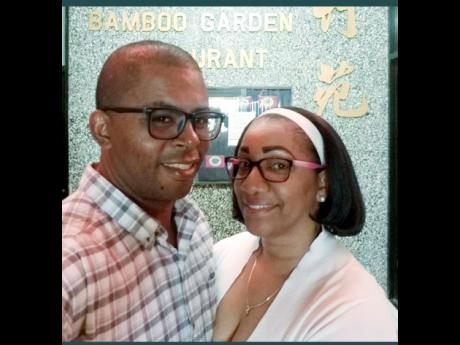 Danian Simpson and his wife Kerry-Ann

Thirteen years of marriage ended in pain and sorrow for Kerry-Ann last Friday after she received news that her husband, 41-year old Danian Simpson, had been murdered.

The grieving widow told THE STAR that it has been a devastating time for her and their children ages three and 12.

"I am distraught, broken, and hopeful that he was still alive. Right now I feel empty. When I went to the hospital and saw that he was dead, I started crying, and I just keep breaking down," she said. "The three-year-old doesn't understand. She is not crying, but she knows he was killed, and she doesn't ask for him anymore. She just keep saying, 'They shoot daddy and kill him'."

According to reports, Simpson and his father were at their at their business place in Williamsfield, Manchester.

About 7:15 p.m., Simpson was approached by a man who robbed him of his licensed firearm and wallet.

A tussle then ensued and both Simpson and his father were shot. They were rushed to the hospital. Simpson succumbed to his injuries while his father has been admitted.

Kerry-Ann said that the couple's elder daughter has been clinging to articles of her dad for memories.

"The 12-year-old, who understands, is mourning, and she wears his clothing," Kerry-Ann told THE STAR. "She feels it more at nights when she is to go to bed, but she has been playing online games, and her friends call her on WhatsApp to cheer her up."

Simpson, who was an only child, has also left his parents in a state of complete disbelief.

"His mom and dad are finding it hard to accept. They keep breaking down because he is sadly missed," Kerry-Ann told THE STAR. "He was a family man, very jovial and friendly, and he loves his girls so much. Dan worked hard to make sure we are good, and he was protective of me and the children."

Close family friend Carol Archibald said that Simpson was a gem and that it has been a challenging time for her.

"He was a really nice guy, the sort of person who is just very humble. Right now my pressure is high because I'm in such shock. I'm at work and I just feel like a zombie. I just can't seem to understand what happened," Archibald told THE STAR.