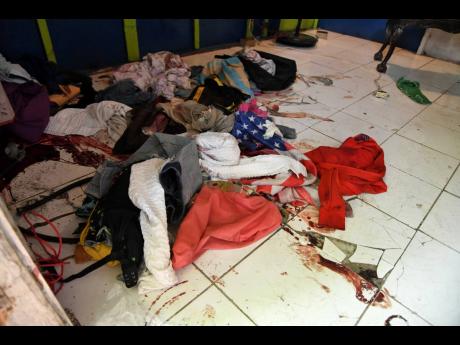 The place where Nicola Pink and Tavoy Smith were murdered on Chestnut Lane in Denham Town, Kingston, yesterday.

Denham Town in downtown Kingston was rocked by a triple murder yesterday. The incident is the latest in a string of violent acts carried out in the Western Kingston that is gripped by an ongoing gang feud.

It is reported that about 3:30 a.m., a group of armed thugs went and kicked off the door of a house on Chestnut Lane where Nicola Pink, also known as Trudy, and Tavoy Smith, also known as No Bootz, were asleep. The men opened fire killing both. They also killed a neighbour, 35-year-old electrician Codwin Morris, who lived in the same yard.

"A run him run come out when him hear the shot and dem just start shoot him up. People a say him give weh him life, but the man never know where the shot dem a come from ... Him a run outa danger and run inna danger," one resident told THE STAR.

Senior Superintendent Stephanie Lindsay, head of the Corporate Communications Unit (CCU), told THE STAR that three persons were shot multiple times and all succumbed to their injuries.

"Based on my discussion with the commander, it's a part of an ongoing feud that has been happening in the area for some time now between the guys from Scream Corner and the guys from a gang called Young Generation."

"So, it's a continuation of that same feud that has led to these three deaths."

The police have confirmed that this uptick in violence in the West Kingston area stems from gang-related reprisals and the assertion of dominance by the Young Generation gang.

"All of the incidents that have been taking place lately are gang related but not all of them are related to each other," a senior policeman told THE STAR recently. "It is said that the Scream Corner gang no longer wants to be part of the broader system, they want to be left alone by Tivoli Young Generation but of course Tivoli YG wants to dominate in the entire West Kingston space."