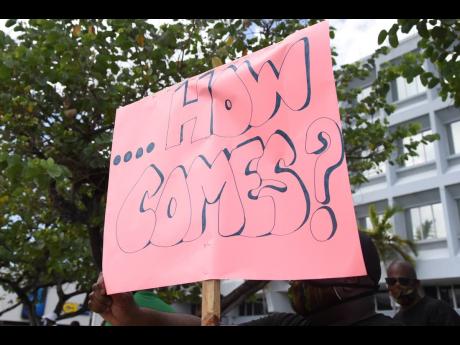 This placard was held aloft by a demonstrator during a protest on Trafalgar Road in Kingston in July 11 as persons sought answers about their high light bills. Complaints against the Jamaica Public Service Company have increased by196 per cent.

The number of customer complaints to the Office of Utilities Regulation (OUR) during the April-June 2020 quarter jumped by 91 per cent, when compared with the preceding period. There were 1,974 complaints over the period compared to 1,033 the previous quarter.

Complaints relating to the Jamaica Public Service Company Limited (JPS), recorded the largest increase, at 196 per cent, moving from 303 in the January to March quarter to 898 in April to June.

At the same time, complaints against the National Water Commission (NWC) rose 60 per cent; a massive 57 per cent more customers had grievances with Columbus Communication (FLOW), when compared with the previous period.

Billing matters, which registered the highest increase in customer contact to the OUR, was the main reason for utility consumers contacting the regulator. The JPS and NWC with 669 and 284 of contacts, respectively, accounted for the highest number of billing-related matters.

Service interruption issues, at 12 per cent of total contacts, remained the second highest reason for customer contact to the OUR.