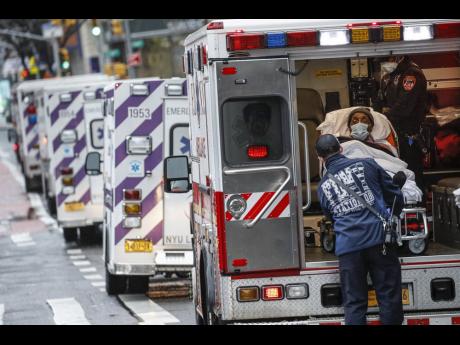 FILE - In this Monday, April 13, 2020, file photo, a patient arrives in an ambulance cared for by medical workers wearing personal protective equipment due to COVID-19 coronavirus concerns outside NYU Langone Medical Center in New York. America's failure so far to contain the spread of the coronavirus as it moves across the country has been met with astonishment and alarm on both sides of the Atlantic. (AP Photo/John Minchillo, File)

ROME (AP) — With confirmed coronavirus cases in the U.S. hitting 5 million Sunday, by far the highest of any country, the failure of the most powerful nation in the world to contain the scourge has been met with astonishment and alarm in Europe.

Perhaps nowhere outside the U.S. is America’s bungled virus response viewed with more consternation than in Italy, which was ground zero of Europe’s epidemic. Italians were unprepared when the outbreak exploded in February, and the country still has one of the world’s highest official death tolls at over 35,000.

But after a strict nationwide, 10-week lockdown, vigilant tracing of new clusters and general acceptance of mask mandates and social distancing, Italy has become a model of virus containment.

Much of the incredulity in Europe stems from the fact that America had the benefit of time, European experience and medical know-how to treat the virus that the continent itself didn’t have when the first COVID-19 patients started filling intensive care units.

More than four months into a sustained outbreak, the U.S. reached the 5 million mark, according to the running count kept by Johns Hopkins University. Health officials believe the actual number is perhaps 10 times higher, or closer to 50 million, given testing limitations and the fact that as many as 40% of all those who are infected have no symptoms.

With America’s world’s-highest death toll of more than 160,000, its politicized resistance to masks and its rising caseload, European nations have barred American tourists and visitors from other countries with growing cases from freely traveling to the bloc.

France and Germany are now imposing tests on arrival for travelers from “at risk” countries, the U.S. included.