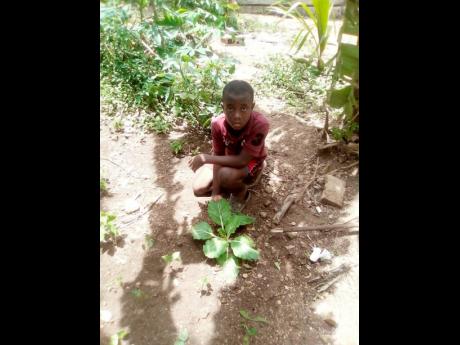 Jhevado with some of his pak choi. 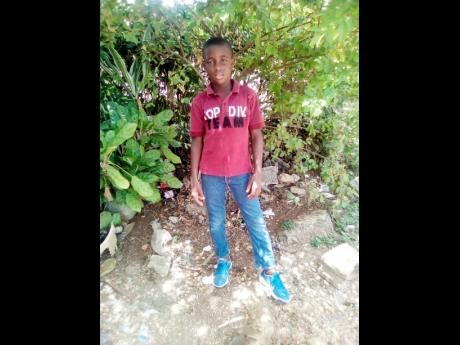 Jhevado Henry, a nine-year-old farmer from Hague, Trelawny, has been making strides in the agricultural sector, despite only doing it for less than four months.

Jhevado said that he cultivates various crops, to which he is very dedicated.

"Me plant pepper, callaloo, pak choi, sweet pepper, okra, pumpkin and sweet potato. A from me a go school me a plant them. Me go pon the farm every morning, me wake up early like 5 o'clock, and when me go me water the things them and cut pak choi," he said.

The Hague Primary student informed THE STAR that his passion for farming grew just from watching his father in the fields.

"Me just like what me father do. Him raise cow, goat and him plant yam and all different things," he said. Recently, Jhevado received packages being distributed by Hi-Pro, under its the Grow Strong Initiative.

According to Denise Johnson-Anderson, marketing officer, Hi-Pro, the initiative, which was rolled out in June, is aimed at assisting farmers to resurface, having experienced much loss due to the COVID-19 fallout.

"The Grow Strong Initiative is Hi-Pro's effort to give back to the agriculture sector and stimulate growth and motivate the farmers in the sector because we depend on them so much," she said. "It has been a rough couple of months for them but if we come together, we should be able to achieve great things; so this was our effort."

Through partnership with agricultural agencies, livestock associations and farm stores across the island, Hi-Pro, over the next five months, plans to distribute a total of 78 tons of Hi-Pro feed and 900 Grow Strong Crop kits, worth $23.6 million, to farmers.

The packages contain seeds, insecticides, fungicides and herbicides. Henry, who is the youngest recipient thus far, told THE STAR that he is grateful for the help.

"Them give me two bag a feeding and a pack of okra and other things. Me feel good and me a plan to plant the okra tomorrow," he said.

Jhevado's passion for farming had initially caught the attention of Tyrone Nickle, sub-officer of the Trelawny division of the police's Praedial Larceny Unit.

He told THE STAR that he was intrigued by the young farmer's drive towards farming and saw it fit to get him listed as a recipient.

"Jhevado was recommended by the Community Safety and Security department and we made checks and found out that he was a farmer and he was in need of the supplies," he said. "The fact that at such a young age he is interested in farming says a lot. Based on the statistics that we have here in Trelawny, older persons are farmers. We don't usually find children at that young age drawn to farming, so that struck me and he needed the help."

Jhevado already has a plan in place to continue making a living from tilling the soil.

"Me wah try and make up a little stall in a Falmouth Market so me can sell," he told THE STAR.