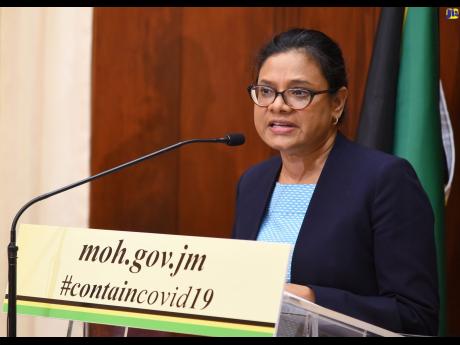 Chief Medical Officer (CMO), Dr. Jacquiline Bisasor-McKenzie, says not enough time has passed to determine whether persons who have had COVID-19 will develop immunity to the disease.

The CMO pointed out that most countries have not gone a full six months since being affected by the disease.

“It is still early to determine if and when persons develop antibodies, if those antibodies will prevent them from getting the disease again, and if so, how long they will be protected,” she explained.

“We don’t have all the information on this SARS COV 2 virus. With other coronaviruses we have seen an immunity period of two to three years and many persons are hoping that this is the kind of immunity that will be conferred by this virus, but we are still unsure of this,” the CMO said.

She noted that the disease was first discovered in China in December and that the first country to be affected outside of China, which was Thailand, had its first case in January.

“We continue to get new information, and this is still a fairly new disease, so you have case studies coming out every day, with some even contradicting others. Today you hear something, two weeks later it’s something different,” the CMO noted.

Dr. Bisasor-McKenzie conceded that since the onset of the disease, there have been a few cases in other countries, where persons have reported being reinfected although they had been declared COVID-free.

She warned against raising alarms in these instances, as there could be valid explanations.

The CMO said it was possible that a discharge test might not have been done and that there was instead a reliance on cessation of symptoms to declare the person COVID-free. In that event, she said that the persons could have developed symptoms, due to other influenza-like illnesses and had a test redone.