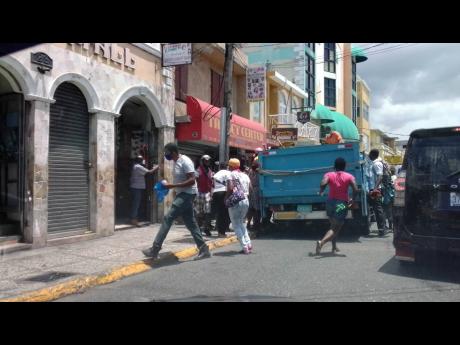 Persons rush toward the ‘giveaway truck’ in downtown MoBay on Wednesday.

Despite being placed under strict restrictions and COVID-19 curfew measures, shoppers, commuters, motorists, and vendors in Montego Bay got a feel of Christmas on Wednesday, when they were showered with items as part of the COVID-19 giveaway by an unnamed hotel.

A truck transporting the goods, which included furniture and appliances, drove into the heart of downtown Montego Bay, with the men on the truck telling persons that the items were being given away.

Persons were doubtful at first but when one of the men on the truck started throwing dozens of T-shirts and other clothes into the crowd, persons came forward.

The area came to a standstill for several minutes, as motorists parked in the middle of the roadway, vendors left their stalls unattended, and shoppers inside several stores ran towards the truck.

One of the men on the truck told THE WEEKEND STAR that they were hired by a hotel which had recently closed its doors due to the COVID-19 epidemic, and given orders to just drive around in the city, and give away the items.

"Is a hotel from out a Rose Hall. Dem clean out dem inbond shops, all a di bedroom dem, craft shops, and other areas pon the hotel compound, and jus gi wi fi give away," said the laughing truckman.

Recipients of the benevolence were happy but didn't want to be photographed.

"A di first mi si something like this. Mi nuh care a who, all mi know seh is that mi get sumpn, because yuh know seh COVID-19 mek tings rough pon all a wi," a female vendor stated. "Mi naw tell no lie. Mi a carry some a the things go a mi yard, and mi gwan sell some."

A group of barbers who also shared in the festivity stated that they had got several chairs and other furniture, and those items will do well in giving their homes a facelift, seeing that COVID-19 has placed a hold on their customers.