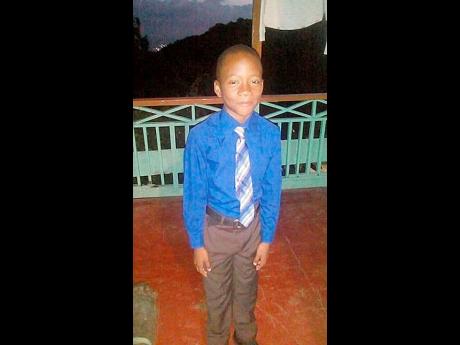 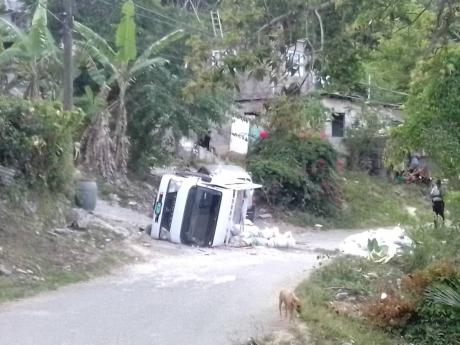 The overturned truck in which Nathan and others were travelling.
1
2

The St James police have reported that two persons who were injured in a freak accident which claimed the life of a seven-year- old last Friday have been discharged from hospital.

Keno Russell and a 10-year-old girl survived the accident, which took place in Belmont, St James.

But the girl's little brother, Nathan Howell, a second grade student at the Anchovy Primary School, was not as fortunate.

Reports by the Anchovy police are that about 2:35 p.m., Russell along with Nathan, his sister, and their mother were travelling in a white 2006 Mitsubishi Canter motor truck, which was being driven by Wayne Thompson, and transporting bags of construction sand in their community.

On reaching a slope which leads into the family yard, the mother alighted from the front of the truck, leaving the children and Russell, who were travelling in the rear of the truck.

Thompson was in the process of driving up the slope, when the truck developed mechanical problems, and ran backwards.

On reaching the foot of the slope, the truck overturned, resulting in several bags laden with sand falling on Nathan, killing him on the spot.

His sister and Russell sustained serious injuries and were rushed to hospital where they were admitted and treated, and later released.

Patricia Lewis, Nathan's grandmother, told THE STAR that they will never be the same.

"Nathan was such a loving child, he was good in every way. He was loving, kind and fun to be around, and his death has taken a toll on the family," Lewis said. "Nathan ... always gives jokes and keep us alive. That morning when I last saw him, he was giving his jokes as usual and nobody knew that it was the last we were going to see him," she added.