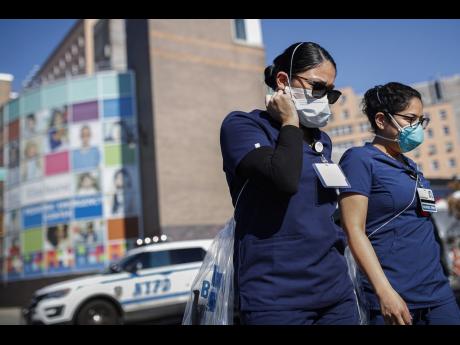 Nurses leave Elmhurst Hospital Center where COVID-19 testing continues outside, Friday, March 27, 2020, in New York. The new coronavirus causes mild or moderate symptoms for most people, but for some, especially older adults and people with existing health problems, it can cause more severe illness or death. (AP Photo/John Minchillo)

NEW ORLEANS (AP) — New Orleans rushed to build a makeshift hospital in its convention center Friday as troubling new outbreaks bubbled in the United States, deaths surged in Italy and Spain and the world warily trudged through the pandemic that has sickened more than a half-million people.

Punctuating the fact that no one is immune to the new coronavirus, it pierced even the highest echelons of global power, with British Prime Minister Boris Johnson becoming the first leader of a major country to test positive.

While New York remained the worst hit in the U.S., Americans braced for worsening conditions elsewhere, with worrisome infection numbers being reported in cities including New Orleans, Chicago and Detroit.

“We are not through this. We’re not even half-way through this,” said Joseph Kanter of the Louisiana Department of Health, which has recorded more than 2,700 cases, more than five times what it had a week ago.

Italy recorded its single biggest rise in deaths, with 969 more victims, to bring its total number of fatalities to 9,134. The country now has 86,498 cases, surpassing China to record the grim distinction of the second-most infections in the world, behind the U.S.

Italian epidemiologists warn that the country’s number of cases is likely much higher than reported — perhaps by five times — although two weeks into a nationwide lockdown the daily increase seems to be slowing, at least in northern Italy.