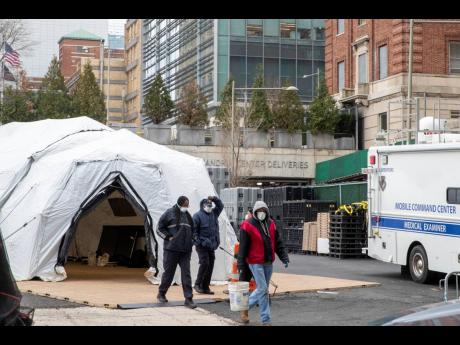 Medical and construction workers are seen at the site of a makeshift morgue that was built outside a hospital in New York on Wednesday. 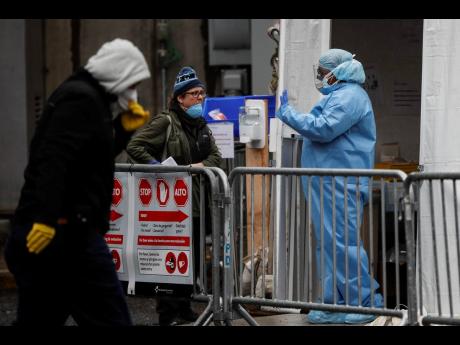 A medical worker speaks with patients at a COVID-19 testing station at the Brooklyn Hospital Center in New York.
1
2

Ermine, a Jamaican who has lived in Brooklyn, New York, says she is extremely worried about COVID-19. She has a high fever, runny nose, and has been coughing for the past two weeks.

"I just came from the doctor's office as I showed symptoms of COVID-19 with high fever (103degF). My temperature has, however, dropped to 98 degrees," she told THE WEEKEND STAR on Thursday.

"I'm awaiting my test results but don't think I have the coronavirus as my body has built up a resistance to it," she added.

New York, as of Thursday, had more than half of the 80,837 cases recorded in the United States.

"It's scary out there. I don't even watch the TV," Ermine told THE WEEKEND STAR. "I'm really scared. It is spreading rapidly in the state of New York, so I stay home as I don't want to contract it."

Like Ermine, other Jamaicans living in New York, the hardest-hit area in the United States of America, say they are taking extra precautions to reduce the likelihood that they will contract the novel conoravirus.

"I'm not going outside, none at all," Steve Green, a Jamaican who lives in Manhattan, told THE WEEKEND STAR.

"I have stocked up on food and essential items for at least a month because I don't really know how long I will have to stay home. This virus is not a joke thing. People are being infected daily, and people are dying here. There is also a makeshift morgue outside the Bellevue Hospital Centre in New York City, which is a telling tale of what this virus can do," he added.

Shauna Hawke, a Jamaican who lives in New York City, says she has been taking precautions.

"I have to go work because I'm with essential services in America. I'm a nurse. I wear my protective gear. When I'm not working, I stay in as soon as I leave work. It's a scary thing going on in America and the world, however, I'm a Christian, and my faith will get me through all of this," she said.

"I just trust in God every day, and I rely on His promise. He promised me Psalm 91, and I hold on to it,"Hawke said.

In the meantime, some undocumented Jamaicans living in the United States have been left stranded after they left their jobs and attempted to return home on Tuesday. One woman, who worked at a nursing home, said she gave up her job and tried to return home before Jamaica closed its borders on Tuesday night. However, flight cancelations meant that she was grounded in the USA.

She said that when she asked her former employers back for her job, they refused to reinstate her.

The woman, who has asked that her identity be withheld to prevent her being targeted by US immigration officials, said several other Jamaicans were left stranded at the Fort Lauderdale Airport on Tuesday morning. She said that members of the group were laid off from their hotel jobs in Tampa, Florida, due to the coronavirus and travelled 90 minutes on a chartered bus as they wished to return home.

However, minutes before their scheduled departure, they were informed that their connecting flight to Monetgo Bay, Jamaica, had been cancelled.

"It is the third time me a try come home, and get stuck, like say I must not go back to mi country," one man lamented.

"What we must do? Is look like a banana boat we must tek to reach Jamaica," another man said.