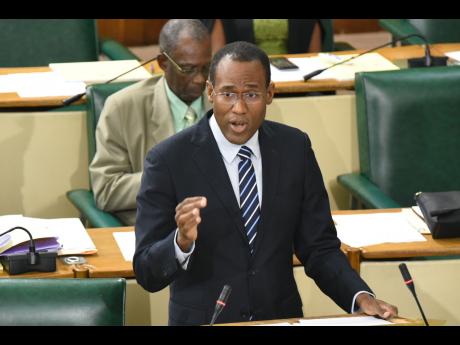 Minister of Finance and the Public Service, Dr Nigel Clarke, says the measures being taken by the Government to contain the spread of the coronavirus disease (COVID-19) are aimed at safeguarding the Jamaican population and the health system.

“As we have witnessed around the world, the virus that causes COVID-19 is very durable and highly contagious. Without strong measures, a population will experience an exponential growth in the number of new cases, which can engulf a city, overwhelm the health system, and drown a nation,” he said, while closing the 2020/21 Budget Debate in the House of Representatives on March 24.

The country announced its first imported case of the virus on March 10, and, to date, 25 cases of the virus have been confirmed, with one death.
Some of the containment measures introduced by the Government include closing airports and seaports to incoming passenger traffic for 14 days, restricting travel from several countries, rescinding permits for entertainment events, having non-essential employees work from home, closing schools,restricting mass gatherings and movements, quarantining certain communities, among others.

Dr. Clarke said the measures are geared at “flattening the curve” of new cases to a level that the health system and country can manage.

He said the expectation is that, as the volume of new cases increases, it will be at a manageable rate.

The Finance Minister said that while few countries have managed to actually “flatten the curve”, Jamaica has taken strong action “and so far, we have escaped exponential growth of new cases. Moreover, so far, Jamaica is keeping the curve flat”. He argued that the strong, preemptive actions being taken by Jamaica and other countries across the globe to flatten the curve and protect public health will have a profound economic impact “not just for today, but possibly, for years to come”.

“The world is entering an unprecedented and historic global shutdown,” he said, noting that “the pace with which these developments are unfolding is leading to rapid revisions of growth estimates across the world.

“We cannot say with any degree of certainty when normality will resume, as it depends on factors beyond our control. We cannot see return to normality until after the United States and Europe have flattened their curves and until after the world knows much more about this coronavirus,” he added.

In the meantime, Dr. Clarke lauded Prime Minister Andrew Holness, for his leadership in managing the country during this crisis.

Clarke noted that the World Health Organization(WHO) has praised Jamaica for its proactive approach to managing the health crisis, adding that the Health and Wellness Minister, Dr Christopher Tufton, and his team at the Ministry, must also to be recognised for their tireless efforts.

Clarke further expressed gratitude to the healthcare service providers, who are working on the front lines to protect and serve the people of Jamaica in the face of the pandemic.