‘We are collapsing’: Virus pummels medics in Spain and Italy 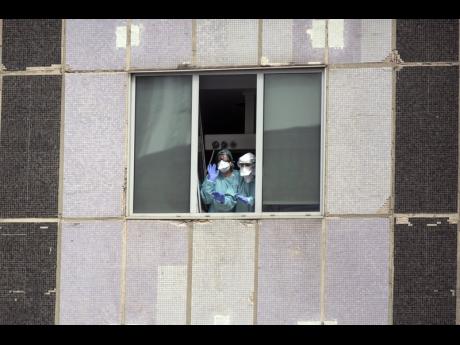 FILE, in this Wednesday, March 18, 2020 file photo, medical workers wearing face masks gesture from hospital La Paz in Madrid, Spain. The coronavirus is winning a war of attrition waged against health care workers throughout the world but more so in Spain, where necessary equipment to shield them from contagion and enough testing kits for the new virus have been lacking for weeks. The new coronavirus causes mild or moderate symptoms for most people, but for some, especially older adults and people with existing health problems, it can cause more severe illness or death. (AP Photo/Manu Fernandez, File)

MADRID (AP) —The coronavirus is waging a war of attrition against health care workers throughout the world, but nowhere is it winning more battles at the moment than in Italy and in Spain, where protective equipment and tests have been in severely short supply for weeks.

Spain’s universal health care system is a source of national pride and often hailed as a reason for its citizens’ legendary longevity, but the outbreak is exposing its shortcomings, some of which are the result of years of budget cuts.

The country’s hospitals are groaning under the weight of the pandemic: Video and photos from two hospitals in the Spanish capital showed patients, many hooked up to oxygen tanks, crowding corridors and emergency rooms. At the 12 de Octubre University Hospital, patients could be seen on the floor as they waited for a bed in recent days. The hospital says the patients have since been accommodated elsewhere.

On Wednesday, the number of medical personnel infected was nearly 6,500 nationally, health authorities said, representing 13.6% of the country’s 47,600 total cases and about 1% of the health system’s workforce. At least three health care workers have died.

In Italy, where nearly one-tenth of about 70,000 infections are among medical workers, doctors and nurses have been begging the government daily to provide more masks, gloves and goggles.

“Please don’t leave us alone: Help us help you,” Dr. Francesca De Gennaro wrote in an open letter, asking for gear. De Gennaro heads a small private medical clinic in hard-hit Bergamo — where some 90 of 460 workers have tested positive.

Italian media have reported at least 19 deaths among health professionals in the country, which leads the world in coronavirus fatalities.