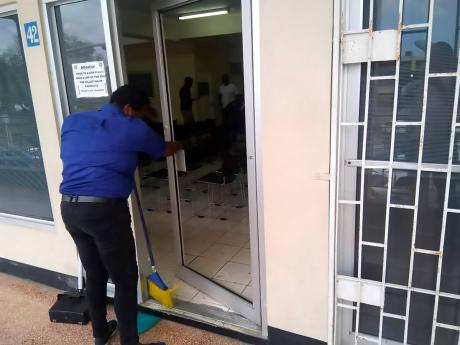 An employee at the passport office in Montego Bay sweeps up broken glass, after a security guard broke through the door, and then drank several substances from a nearby pharmacy.

Dozens of customers who turned up at the St James office of the Passport Immigration and Citizenship Agency in Montego Bay on Thursday morning were sent scampering when the security guard on duty suddenly went wild.

According to the Corporate Communications Unit (CCU), officers from the St James Motorised Patrol Unit responded to a distress call in Overton Plaza (where the office is located) after reports emerged that the security guard, who had been working there for more than a year, began behaving erratically, hurling abuses, and destroying property.

Several alleged eyewitnesses told THE WEEKEND STAR that they are still traumatised over the guard's behaviour.

One man, who gave his name as Sonny, said that a woman accompanied by a small child visited the guard earlier that morning.

"Yuh could see seh dem a argue," he said. "The woman lef, an from that wi notice seh him kinda a get jumpy and everybody start watch him. Next ting wi know, wi si him just lock wi inna the building, an start look all over the room an a shout 'mi caa bother, mi caa bother'."

Sonny said that the guard then started hitting a glass door.

"Cold sweat start wash the whole a wi, an him mek one big chuck pon the glass and bruck it out completely. Him den run through the bruck out glass door, run all bout pon the plaza, till him run dung stairs, an inna one pharmacy," he said. "Him start lick off the tings dem off the counter inna the people dem pharmacy, and dem him start grab all kind a medicine an a drink. Meanwhile, him a shout out seh 'Mi caa tek it no more'," he said.

The CCU said that the motorised patrol team received support from the St James Quick Response Team and an Operations Support Team.

When they arrived at the pharmacy, the man threatened the team and later barricaded himself in a small room inside the pharmacy.

After approximately 15 minutes of negotiating, the team gained entry into the room, subdued and disarmed him. His licensed Glock pistol was seized by the police during the process.

Based on the preliminary investigations, the man was taken to the Cornwall Regional Hospital for immediate treatment and mental health examination.