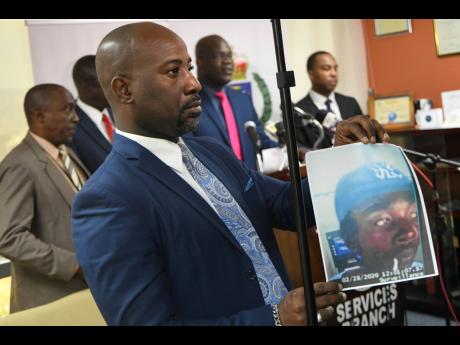 Dennis Brooks, senior communications strategist of the Jamaica Constabulary Force, shows a photo of a person of interest in the disappearance of the UWI student Jasmine Deen.

A person of interest has been identified in the case of missing University of the West Indies (UWI), Mona, student, 22-year-old Jasmine Deen.

The frantic search continues, and, according to the police, the unidentified man is likely to have information regarding Deen's whereabouts.

"We are seeking the public support to identify this particular individual. We will be circulating photographs of that individual," Assistant Commissioner of Police Fitz Bailey said at a media briefing yesterday.

Deen, who is visually impaired, was last seen on Thursday, February 27, in Papine, St Andrew, wearing a white blouse and blue jeans.

She had a smartphone, laptop and knapsack with other school supplies in her possession.

After she failed to get home, her father, Lloyd Deen, made a missing person's report at the Mona Police Station the following day.

Bailey said that a search operation was carried out in the west Kingston area where vital information was received.

"Also, on March 11, 2020, between 5:45 p.m. and 7:40 p.m., Paul Thomas, superintendent of police, led a team of officers on simultaneous operations in Greendale, Manchester, and several premises of Lyndhurst Road in Kingston, in search of Jasmine Deen and persons of interest," Bailey said.

Canvasses were conducted across the Corporate Area, including Papine and downtown Kingston, as well as in Ocho Rios and other places.

About 9:05 p.m. on the day Deen was last seen, she was assisted by Carlton Williams, snack vendor at the 'UWI' back gate to board a black Honda Stream, registered PJ 7352. The taxi reportedly left Deen at a taxi stand in Papine.

"Statements were recorded from the driver and the vehicle was seized for safekeeping. Later that day, the vehicle was photographed and processed by forensic crime scene investigators. The car was later released. The case was then reassigned to the Major Investigations Division," said Bailey.

According to the police, investigations have so far revealed that Deen's cell phone was active up until 12:35 a.m. on February 28.

A security guard from Seven Miles, Bull Bay, and his common-law wife, were also questioned in relation to Deen's case.

"About 4 p.m., they were both interviewed and statements recorded. A silver 2014 Nissan Latio motor car registered 0962 JA was processed by forensic crime scene investigators. A Samsung J3 cell phone was also seized," he said.

Bailey said that the police are hopeful that Deen would be found alive, but given how long she has been missing, that's not definite.