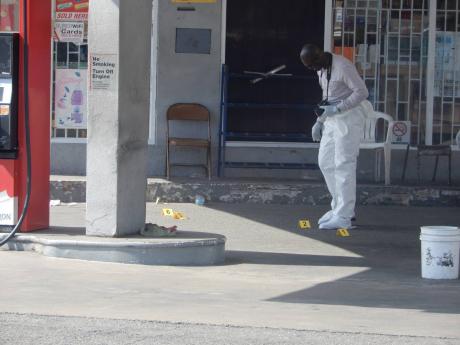 A police investigator at the scene of yesterday’s shooting along Red Hills Road in Kingston.

A shooting on Red Hills Road on Tuesday afternoon has yet again left residents and commuters using the area to panic. Masked men shot and injured a 28-year-old pump attendant at the Texaco service station across from Lee's Food Fair just after 1:30pm.

"I was coming just from over there ... him just change $1,000 fi me. As I reach cross, I heard five shots. A truck was over there letting off shots and a vehicle was parked behind it. Two man run out and yuh nuh see dem face. They have something like socks over them head ... only their eyes out," one vendor told THE STAR.

The man was rushed to the hospital. At press time last night, the Corporate Communications Unit of the Jamaica Constabulary Force said that the victim "is in the hospital in critical condition, where he is being treated for the injuries."

The man's mother was surprised at the shooting of her son.

"Me and my husband was here. Me just start cry and ask God fi mercy. Me affi tek a pressure pill and me just a depend on God right now. I break down a little and then my sister-in-law come and cheer me up."

His mother says when she thinks about their last interaction, she gets emotional.

"He is on morning shift so he left out at 6:30 this morning. The last thing I said to him was 'God go with yuh ... God cover you under the blood.' That's the last thing I said to him this morning. He grew up in a Christian home ... him love football. When anybody hear him, a just noise him a mek bout football. Me son nuh mix up! Him go a work and him come home back," she said.