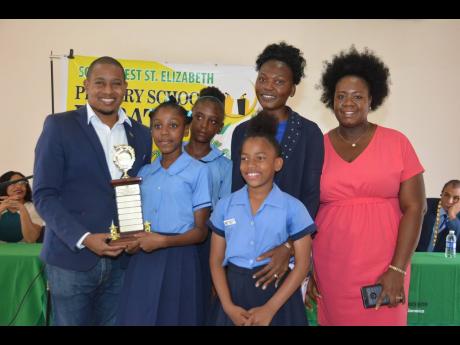 The finals of the contest, organised by the Ministry of Industry, Commerce, Agriculture and Fisheries and the Social Development Commission (SDC), took place at the Black River Parish Library on February 13, where Mountainside Primary faced off against Pedro Plains Primary to emerge the champion.

The school was awarded $50,000 and the first place trophy, with teachers Sameika Forbes and Phylicia Ebanks named best coaches.

All 12 schools that took part in the four-week competition received certificates of participation with Pedro Plains Primary sixth-grader, Maurice Rowe, awarded the prize for best speaker.

Minister of State in the Ministry of Industry, Commerce, Agriculture and Fisheries, Floyd Green, said that the competition exceeded expectations.

"I want to tell them congratulations, you are all winners. I have seen the growth. Some were timid, they took their little time but by the time they reached the finals, they were tremendous speakers," said Green, who is also the Member of Parliament for South West St Elizabeth.